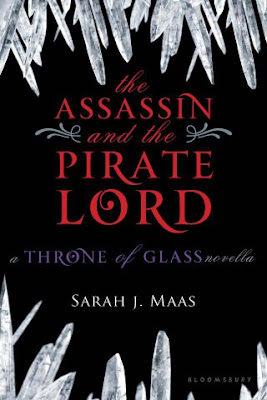 Celaena Sardothien, feared assassin, has come for retribution. Sent by the Assassin’s Guild to a remote island in a tropical sea, Celaena is supposed to be to collecting on a debt they are owed by the Lord of the Pirates. But when she learns that the agreed payment is not in money, but in slaves, her mission suddenly changes–and she will risk everything to right the wrong she’s been sent to bring about.

Review:
The Assassin and the Pirate Lord is the first of four prequel novellas that are being released in the run up to the publication of Sarah J Maas' debut novel Throne of Glass in August. I've been dying to get my hands on the book for months now so I couldn't resist picking up the novellas while I was waiting.

I have to admit that I found the novella a little confusing at first, it jumps straight into the story so as I wasn't familiar with the characters or the world it took a few minutes to figure out what was going on. Having said that this was a great introduction to our main character Celaena and some of the other assassins. She is sent with rival assassin Sam on an assignment to collect a debt owed to them by the Pirate Lord. However, when they arrive they discover that they are actually supposed to bring home slaves rather than money.

Now Celaena may be an assassin but she has a conscience and she doesn't agree with hurting innocents. She is horrified at the treatment of the slaves and is determined to come up with a plan to save them. You have to admire her for the way she is so willing to put herself in danger to save strangers. It was really interesting watching the relationship between Celaena and Sam change throughout the story and I'm hoping we get to see more of them in the novel. I have a feeling they would make quite a fearsome couple if they got together.

The Assassin and the Pirate Lord is a fast paced, action packed, quick read full of drunk pirates and sword fights. This was a fun story and has just increased my excitement for the book, in the meantime I'm looking forward to the next three novellas!