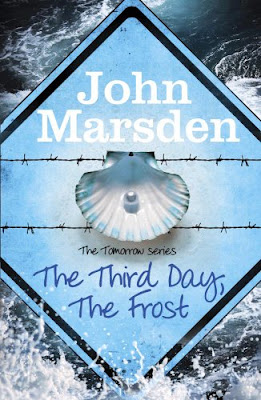 Their country ravaged.
Their families taken.
Their solution - fight.

Ellie and her friends have achieved more than they ever thought possible as an unarmed bunch of teen fighters. But still the war continues. Hiding back in Hell, the gang face the inevitable question - what to do next?

When Kevin returns armed with a knowledge of explosives, the answer becomes clear - launch an attack on the enemy stronghold of Cobbler's Bay. But in their attempt to pull it off, what will the gang have to sacrifice?

Review:
The Third Day, the Frost is the third book in the Tomorrow series by John Marsden and therefore this review may contain spoilers for previous books. This is a series I would highly recommend but I think you really need to read the books in order so if you're not up to date with the series then look away now.

The story picks up a couple of weeks after the ending of The Dead of the Night and we see our teenage heroes hiding out in Hell after their latest attack on the enemy. The boredom of remaining hidden is starting to wear on them all and the loss of yet another member of the group has left them all feeling depressed and out of sorts. In the end they decide that they need something to occupy them and start to plan another attack in Cobbler's Bay. When they manage to break Kevin out of a work camp so he can rejoin them things start to look up. Kevin has a new knowledge of explosives and that gives them all the incentive they need to launch their biggest attack yet. But their biggest attack is going to have the worst consequences and they may not all survive the backlash from the enemy.

I have been thoroughly enjoying this series and am very pleased that I still have another 4 books to read. I have absolutely no idea where the story will go next though, I just can't quite see how it will have a happy ending after the events we've already witnessed! Ellie, Homer, Lee, Robyn, Fi and Kevin are all such brave characters - they have all had to make difficult decisions and I'm pleased that the author doesn't hold back on showing how they have been effected emotionally by the things they have been through. They may be proud of their efforts to disrupt their enemy but they are also horrified by some of the things they have done. This is war and war isn't pretty, their world is a harsh one that is full of danger, death and destruction. I wouldn't cope anywhere near as well as they have if I was in their situation!

The ending of this book was absolutely heartbreaking and left me desperate to get my hands on the next instalment. I can't recommend this series highly enough - it is violent, hard hitting and at times makes for disturbing reading but that is what makes it so compelling and makes it stay with you so long after you've finished reading. I guarantee that these books will leave you questioning yourself about how you would cope if you were in this kind of situation and you might not be comfortable with the answers you come up with.