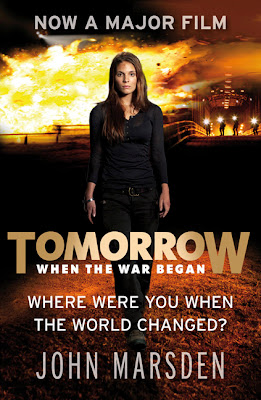 Seventeen-year-old Ellie Linton wants one final adventure with her friends before the school holidays are over.  Packed in Ellie's parents' Land-Rover, they drive to a famously beautiful camp in the hills.

Returning to their homne town of Wirrawee, the seven teenagers realise that something is seriously wrong.  Their world has changed forever.

Tomorrow When the War Began asks the questions you may one day have to answer.

Review:
When Ellie arranges to go on a camping trip with a group of friends it is supposed to just be a week of fun before they have to go back to normal school life.  The last thing they expect is to come home to a town that has been deserted, the phones aren't working, there is no electricity and their families have all vanished.  As they investigate they soon discover that the town has been invaded and the townspeople have been taken prisoner.  With their country now at war Ellie and her friends must use their wits to survive but should they run and hide or stand and fight?

I've heard so many good things about Tomorrow, When the War Began and I really wanted to see the film when it came out last year but I refuse to watch the film before reading the book.  It's taken me a while but I finally read the story but I'm really glad I did.  As the first book in a series much of the story is introducing us to the main characters.  There is a good selection of different personalities and for once, out of a group of 8 teens, there wasn't a single character that I really disliked.  Obviously some are more likable than others but there was no one I absolutely hated.  I'll admit that the romances that start to develop seem to happen a bit too quickly but I guess if you found yourself in the situation these teens do then you probably would look for comfort wherever you could find it.

The story isn't always comfortable reading, there are times when the group face difficult life or death decisions and the choices that they make will have lasting consequences.  They will have to fight for survival and then deal with the emotional fallout of taking another life to save their own.  The book really does make you think about just how far you would be willing to go to protect yourself and your friends.  What would you do to rescue your family?  There are times when you really feel the danger that they are all in and you start to worry about the chance of them all surviving.

Despite the difficult subject matter I found Tomorrow, When the War Began to be a quick and easy read.  The reason it makes you feel so uncomfortable at times is because it feels so realistic, you are pulled into the story and it becomes easy to imagine that the war has really happened.  When an author is able to make me believe I'm going through things with the characters I know I'm reading a good book.  I'm looking forward to continuing the series to see what happens next and I definitely want to watch the film now too!