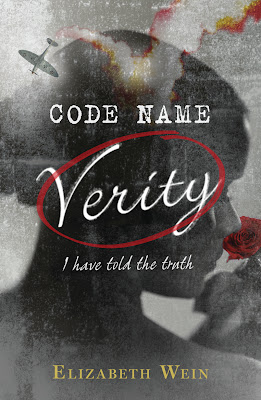 I have two weeks. You'll shoot me at the end no matter what I do.

That's what you do to enemy agents. It's what we do to enemy agents. But I look at all the dark and twisted roads ahead and cooperation is the easy way out. Possibly the only way out for a girl caught red-handed doing dirty work like mine - and I will do anything, anything, to avoid SS-Hauptsturmfuhrer von Linden interrogating me again.

He has said that I can have as much paper as I need. All I have to do is cough up everything I can remember about the British War Effort. And I'm going to. But the story of how I came to be here starts with my friend Maddie. She is the pilot who flew me into France - and Allied Invasion of Two.

We are a sensational team.

Review:
Verity was sent to France as a spy but ended up captured by the Gestapo, after weeks of torture she finally broke and agreed to tell them what she knew of the British War Effort.  Her story starts with the pilot who flew her to France - her close friend Maddie.  Verity tells the tale of how she and Maddie became unlikely friends and the events that led to her own capture.

Code Name Verity is a heart-breaking tale of two incredibly strong women and the part they both played in the war effort.  I have to admit that it took me a while to warm to Verity, it takes a long time before we even learn her name and I found the way the writing style kept switching from first to third person was confusing.  The fact that Verity focuses on telling Maddie's story meant that I felt much more connected to the character that we'd never met than I did to the one who was telling the story.  Having said that once I got used to the writing style I found that I had to keep reading because I needed to know how things would turn out.  I grew to really feel for Verity, she suffers from horrific torture but remained strong, loyal and despite the fact she was terrified she still found small ways to be defiant.

The friendship between Verity and Maddie is a beautiful thing to watch and I really enjoyed reading a story with such strong female characters. Although they both have very different jobs they are both in occupations that were dominated by men, they had to work twice as hard to be considered equals and often found they were passed over for jobs that were given to less qualified male colleagues.  The chances are that they would never have met if it hadn't been for the war, Verity is an upper class girl who was brought up in a Scottish castle while Maddie is from a working class family in Stockport so it would have been unlikely their paths would have crossed.  In a lot of ways they are complete opposites but they have a strong bond that nothing will break.

While fictional the story has an authentic feel to it that just makes it even more heart wrenching to read.  It gives a real insight into some of the roles women had during WW2 and makes for fascinating reading.  I'd definitely recommend the story to anyone with an interest in history but also if you want to read a story with strong female role models.  One thing I would suggest is keeping a box of tissues to hand thought because you'll definitely need them by the end of the book.  This is the first book I've read by Elizabeth Wein but it definitely won't be the last.