Philippa Gregory
On Wednesday I was invited to a very special event hosted by Simon & Schuster to celebrate the launch of Philippa Gregory's first ever YA book.  Along with 5 other bloggers I was lucky enough to get the chance to meet Philippa to get an exclusive sneak peak at the cover of her new book just before the worldwide press release.  We had been asked to send over some questions in advance and on the day we got to ask them in a press conference style.  It was a very different format to anything I'd been to before but it worked really well.

I think we were all a bit nervous before the event started but Philippa was so friendly that it didn't take long for us to relax.  I made loads of notes while Philippa was talking but I have to admit that I was writing so quickly I'm struggling to make sense of my handwriting.  I know I haven't captured everything that was talked about but hopefully I caught enough to give you a good overview of the event.  I'll include the questions and as much of the answers as I can but any mistakes are down to me being unable to decipher my own writing!

Back Row: me, Sammee, Jennie, Philippa & Carly
Front Row: Becky & Viv
1. Feeling Fictional (me) - What made you decide to write your first story aimed at the YA market and did you find it any different to writing adult books?

Philippa said she already knew that she had a lot of teen readers - at some events she has met fans as young as 7 or 8 years old who are reading her books with their mothers! - so it made sense to write a book specifically aimed at them.  She said that the difference between writing for teens and adults is that you are writing for people who have less world experience.  She wanted to make sure that the story she wrote contained strong female role models which is something she feels can be missing from some YA novels.  She wants to challenge the negative views of women and show the importance of women's education.

The time period that Changeling is set in also has relevance to issues we face today.  The Crusades can be compared in some ways to modern day terrorist attacks.  She wants to give readers something to think about and in some ways her YA book is actually deeper than her adult ones.  Philippa said she is a feminist, she was a young woman once, she has a daughter and she thinks that it is important to think about how you write for young women.

2. Bookgeeks (Jennie) - When researching your novels, do you find it more difficult to find original sources that directly describe a female historical experience?  How do you deal with source documents that may often be written from a male point of view?

Philippa confirmed that there is almost no source material available written from a female perspective.  There is modern research available though.  Philippa said you can reconstruct a woman's life based on what the men she knew were doing.  She compared it to a jigsaw puzzle taking lots of little pieces of information and then using your personal knowledge of how women generally behave to make sense of the final picture.  It is even harder to find source material about children - they are hardly mentioned at all and much more guess work is required.

3. Writing from the Tub (Carly) - Do you have an audience in mind when writing, or do you just write for yourself?

Philippa doesn't have an audience in mind when she is writing, she writes purely for her own pleasure and for her interest in the topic.  She thinks about the writing process not about how it will be published or who it will be marketed to.  That's the best way to remain honest to the story.  She believes that all good writers are on their own in a room with their characters when they are writing.

4. Bookgeeks (Jennie) - Do you have a favourite era of history?  What draws you to write about the past?

Philippa said she is the type of person who always wants to know what happened first.  She is very interested in cause and effect and she always questions what led up to a certain event occurring.

The medieval period is her favourite historical era.  She said that people were just starting to come up with scientific theories but there was still a deep belief in magic and the supernatural.  It was a period of time when people were very ready to believe that the end of days were coming (although humans still seem quite quick to accept that everything will end - like with the recent cult in America).  One of the main characters in Changeling, Luca, is hired by a secret organisation who investigate strange occurrences that could signify the end of the world.  He will investigate plague outbreaks, dancing trances and cases of mass hysteria throughout the story.

5. Serendipity Reviews (Viv) - If you could meet one person from history, who would it be and what would you ask them?

Philippa would love to ask Richard III if he killed the princess in the tower (she doesn't believe that he did but she has always wanted to know for sure).  She also thinks it would be interesting to meet Elizabeth I or Queen Isabella of Spain who was a real crusading queen.

Vlad Tepes (also known as Vlad the Impaler) probably wouldn't be a good person to meet - she doesn't think he'd be a very good host - but she thinks he would be fascinating to study from a distance.  Vlad actually makes an appearance in Changeling so I'll be really interested to see Philippa's version of him!

6. The Bookette (Becky) - Are there any significant benefits or drawbacks to writing about historical figures?  Does it present any particular challenges as a writer?

The advantages include the pleasure she gets from writing about something that she is so interested in.  Challenges are caused when she has to decide between historical accuracy and where her creative side would like to take the story.  It can be hard to tie the two sides of the story together but she said that she always goes for historical accuracy when she has evidence to prove something.  When there is no evidence she is able to let her creativity fill in any gaps.

7. Feeling Fictional (me) - Have you ever thought about writing a contemporary novel or do you think you'll always stick to writing historical fiction? (Yes, I did feel like an idiot when I heard the answer to this question!  I could have sworn Philippa had only written historical fiction!)

Philippa has already written some contemporary fiction (The Little House, Perfectly Correct, Alice Hartley's Happiness and Zelda's Cut).  She said that in some ways they are a lot easier to write as there is less research needed.  However, in her most recent contemporary (Perfectly Correct) she still ended up with a link to the suffragettes that meant she had to do a lot of research so she does tend to be drawn to historical fiction even when she isn't attempting to write it!

8. I Want to Read That (Sammee) - Are there any authors that have been a strong influence on you / inspired you?

Philippa said that you can't be a writer without being an avid reader.  She was influenced by a childhood spent reading and she grew up in a bookish house.  She read a lot of classic children's literature and then moved on to reading Jane Austen (who she said has a beautiful writing style).

At the moment she is reading a lot of Charles Dickens, she tried reading his books when she was younger but didn't get on with his writing style then, now she has grown into it she is really enjoying reading through all of his books.  Dickens was very committed to social change and got very angry about social injustice and Philippa finds it interesting to read his work from a historical point of view.

9. Writing from the Tub (Carly) - What's the best piece of writing advice you've ever been given (and do you follow it)?

Someone told her that if you get blocked you need to find a way to get your unconscious mind working on the problem.  They suggested setting an alarm clock for 4am, getting up and immediately starting to write - it helps to get your dream self working.  She has tried that a few times but over the years she has developed her own methods to reach her unconscious.

Now when she gets stuck she will take the dog for a walk, she picks a direction and tells herself that no matter how long it takes she isn't going to turn around and walk home until she has solved the problem - even if it takes her all night.  For some reason she always manages to come up with an answer before it gets dark!  She said there have been a few close calls but she thinks that her unconscious mind is scared that there might be wolves out after sunset so it will do anything to come up with an answer before dark.

Philippa confirms that she writes anywhere and everywhere., writing an average of 2 books a year means she has to keep writing but she mainly does it because she enjoys it.

11. The Bookette (Becky) - What do you read for pleasure?

I'm sure it won't come as a surprise to hear that Philippa reads a lot of historical fiction for pleasure.  She also mentioned that when she goes on holiday she tends to pick an author and will then read through their books back to back.

Changeling is the first book in Philippa's new Order of Darkness series.  Philippa confirmed that the agreement is currently for 4 books but the series length may be extended in the future, she has already started writing book 2 and knows the plots for books 3 and 4.  There has already been interest in turning the books into a TV series but nothing is confirmed at this time.  I'll be keeping my fingers crossed for that one!

We got to read an extract from Changeling and I have to tell you I can't wait to get my hands on the rest of the book - I already know I'm going to love it!  What do you think of this cover?  It's absolutely stunning isn't it?! 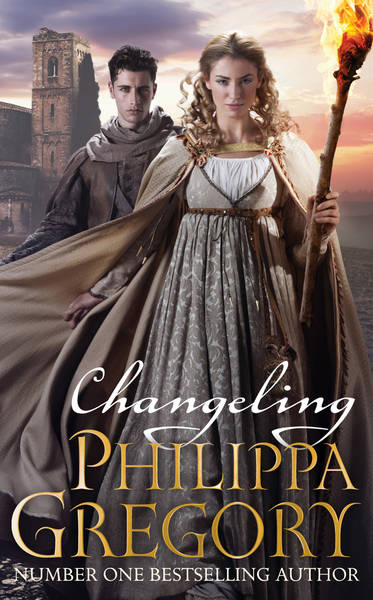 The year is 1453 and all signs point to it being the end of the world.

Accused of heresy and expelled from his monastery, handsome seventeen-year-old, Luca Vero, is recruited by a mysterious stranger to record the end of times across Europe.  Commanded by sealed orders, Luca is sent to map the fears of Christendom, and travel to the very frontier of good and evil.

Seventeen-year-old Isolde, a Lady Abbess, is trapped in a nunnery to prevent her claiming her rich inheritance.  As the nuns in her care are driven mad by strange visions, walking in their sleep and showing bleeding wounds, Luca is sent to investigate and driven to accuse her.  Outside in the yard he can see a pyre being made ready to burn the guilty . . .

Changeling will be published in the UK, US, Canada, Australia and India on the 24th of May 2012.

I'd like to say a massive thank you to Simon & Schuster for arranging the event, I had a fabulous time and it was great to find out so much about Changeling.  I'd also like to thank Philippa Gregory for happily answering all of our questions and for taking the time to pose for pictures on such a busy day.


Who was there:
Kat & Venetia - Simon & Schuster
Philippa Gregory - Website
Becky - The Bookette - Event Report
Carly - Writing from the Tub
Jennie - Bookgeeks
Sammee - I Want To Read That
Viv - Serendipity Reviews
at 16:00