Review: The Dead of the Night - John Marsden 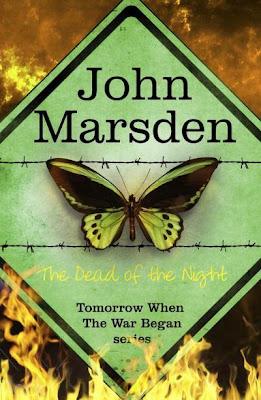 Would you give up everything?
Would you fight?
Would you sacrifice life itself?

When their country is invaded and their families are taken, eight high school teenagers band together to fight.

Seventeen-year-old Ellie and her friends have survived the invasion, but Kevin is imprisoned and Corrie is alive, but in a coma.

Homer and Ellie are determined to get them back and to continue their campaign against the enemy.  As the pressure grows, can Ellie work out her conflicted feelings for the brilliant, arrogant Homer and the strong, gentle Lee?

As war rages, and the enemy closes in, Ellie and her friends must once again fight for their lives . . . but how many of their band will be left?

A truly involving story about the incredible challenges of warfare, amid the intensity of first love.

Review:
The Dead of the Night picks up the story a couple of weeks after the ending of Tomorrow, When the War Began and we re-join Ellie and her friends at their camp in Hell.  The loss of two members of their group has been a huge blow to them, especially coming after the high brought by their successful mission to destroy the bridge.  The remaining six have been hiding at their camp licking their wounds but the time has come for them to face the outside world again.  They need to try and discover what has happened to their missing friends, it is time to try and gather more supplies and they are ready to find another way to fight back at the enemy who has invaded their hometown.

I really enjoyed the first book in this series so was looking forward to continuing my journey with Ellie and her friends.  The story continues to be narrated by Ellie who is keeping a written record of events for the future.  Picking up this series is like reading Ellie's personal diary, she is honest to a fault and although everything is her personal opinion she doesn't shy away from the darker things that they all have to do to survive.  Although the others chose Ellie to write their story they aren't all happy with the things she has written and it was interesting to see how the group dynamics changed because of that.

This series continues to put it's main characters into incredibly dangerous situations, they all show a great deal of strength and determination to survive, they each have to face difficult moral dilemmas and have to decide just what lengths they are prepared to go to in order to fight their enemies.  I enjoyed the story for it's action and the creative ways the teens come up with to go into battle but I think what I like most is the fact that it raises so many questions.  The series really makes you think and leaves you pondering what you would do in a similar situation long after you finish reading.

Another thing I'm really enjoying is the setting, I love the Australian slang and getting a feel for the bush and farmland surrounding Wirrawee.  I don't think I've read many books set in Australia, well not ones that give such an impression of the land anyway, so it's making a nice change for me.  I'm really looking forward to continuing the series and finding out what happens to the group next, can they continue to survive when the enemy is surrounding them?