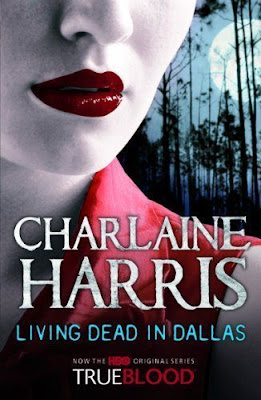 Sookie Stackhouse likes living in Bon Temps, Louisiana, and she likes working as a cocktail waitress at Merlotte's.  But she is having a streak of bad luck.  First her co-worker is killed, and no one seems to care.  Then she comes face-to-face with a beastly creature which gives her a painful and poisonous lashing.  Enter the vampires, who graciously suck the poison from her veins (like they didn't enjoy it).

The point is: the vampires saved her life.  So when one of the bloodsuckers asks for a favour, she obliges - and soon Sookie's in Dallas, using her telepathic skills to search for a missing vampire.  She's supposed to interview certain humans involved, but she makes one condition: the vampires must promise to behave, and let the humans go unharmed.  But that's easier said than done, and all it takes is one delicious blonde and one small mistake for things to turn deadly . . .

Sookie Stackhouse Series:
Dead Until Dark
Living Dead in Dallas
Club Dead
Dead to the World
Dead as a Doornail
Definitely Dead
All Together Dead
From Dead to Worse
Dead and Gone
Dead in the Family
The Sookie Stackhouse Companion
Dead Reckoning
Playing Possum (Short Story in the An Apple for the Creature Anthology)
Deadlocked
Dead Ever After
After Dead: What Came Next in the world of Sookie Stackhouse

Review:
If you read my review of Dead Until Dark then you'll know I was disappointed by the start to this series.  Being a big fan of the True Blood TV show meant I had high expectations when I picked up the book and I thought that might have been why I felt so let down when I read it.  The only reason I decided to continue with the series is that I already had the first 8 books on my shelves and a lot of people have told me that the series gets a lot better from book 3 onwards.  Considering my low opinion of the first book I wasn't expecting much from Living Dead in Dallas but I still found myself struggling to finish the book.  This is such a popular series and I know I'm in the minority but I think I'm going to have to face the fact that Sookie and I aren't meant to get along.

The story has two distinct plot threads going on but I didn't feel like there was any cohesion between them.  The first involves the death of one of Sookie's co-workers and an attack on Sookie herself by a strange paranormal creature and I felt that this part of the story could have been really interesting.  However, it felt like the author finished writing it and realised there wasn't enough material for a full length novel so she wrote a completely separate story and just plonked it in the middle of the book.  The second plot thread involves Sookie heading to Dallas on a task for Eric who has hired her out to another vampire who needs her unusual mind reading talents.  Again this side of the story could have been interesting, it introduces the vampire hate group The Fellowship of the Sun but although there is some action I still felt like something was missing.  I can't help feeling that True Blood manages to do a better job with both story lines than the book did.  Perhaps that is part of my problem with this series though - I shouldn't have watched True Blood until after reading the books and then I may have enjoyed them more.

When it comes to the characters I still can't stand Bill, I want to see Sookie haul his coffin out into the sunshine, open the lid and leave him there.  I don't feel the slightest bit invested in their relationship and don't see any evidence that either of them are in love.  I'd much rather see Sookie stand on her own two feet rather than let Bill treat her like a walking buffet.  I have to admit that I'm really falling for Eric though, I love his character in the TV series and am enjoying his interaction with Sookie even more in the books.  If there is any reason to keep reading the series then Eric would be it.

I'm not sure if I will continue with the series though.  I'm torn because I did find the writing better in Living Dead in Dallas, I thought there was a lot less pointless information included which made it much easier to read.  Also, I already have the next 6 books so it seems a shame to not at least try reading them, especially when everyone tells me book 3 is where the series really starts to kick off.  I think I'll take a break for a bit and then I'll probably give Club Dead a try but I'm not going to keep banging my head against a brick wall and if I don't enjoy it more than the first 2 books then I'll have to give up on the series.  I will continue to watch True Blood though so at least that way I'll hopefully get to watch Sookie kick Bill to the kerb and hook up with Eric (well I'm keeping my fingers crossed for that to happen anyway!).

Source: This book was given to me as a Christmas present.