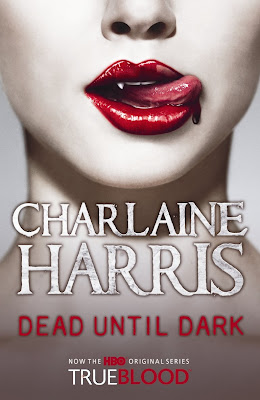 Sookie Stackhouse is a small-time cocktail waitress in small-town Louisiana.  She's quiet, keeps to herself, and doesn't get out much.  Not because she's not pretty.  She is.  It's just that, well, Sookie has this sort of 'disability'.  She can read minds.  And that doesn't make her too datable.  And then along comes Bill: he's tall, dark and handsome - and Sookie can't 'hear' a word he's thinking.  He's exactly the type of guy she's been waiting for all her life.

But Bill has a disability of his own: he's a vampire.  Worse than that, he hangs with a seriously creepy crowd, with a reputation for trouble - of the murderous kind.

And when one of Sookie's colleagues is killed, she begins to fear she'll be next . . .

Sookie Stackhouse Series:
Dead Until Dark
Living Dead in Dallas
Club Dead
Dead to the World
Dead as a Doornail
Definitely Dead
All Together Dead
From Dead to Worse
Dead and Gone
Dead in the Family
The Sookie Stackhouse Companion
Dead Reckoning
Playing Possum (Short Story in the An Apple for the Creature Anthology)
Deadlocked
Dead Ever After
After Dead: What Came Next in the world of Sookie Stackhouse

Review:
I have to start this review by mentioning how much I wanted to love this book.  I'm a big fan of the True Blood TV series but it's taken me a long time to get around to reading the books (even though I was given a box set of the first 8 books for Christmas 2 years ago).  I've heard so many good things about the series that I picked up Dead Until Dark with really high expectations and I think that was possibly part of the problem because I ended up so disappointed.  I actually struggled to finish reading it and think I would have given up if I didn't already own the next 7 books.  I really think I'm in the minority though as most people can't seem to get enough of these books.

I'm not going to go into great detail about the plot because so many people have already read the series or seen the TV show so I'm going to focus on the things that I did and didn't like about it instead.  One of the things that really bugged me was the pure amount of pointless information we are given, within a couple of chapters it felt like I'd spent hours reading about Sookie's daily routine, Gran's laundry habits and had a lesson on how to properly clean a house, none of which I found even remotely interesting.  This made the plot feel incredibly slow, especially for the first half of the book.  The action finally picks up right at the end when the murderer is revealed but at that point everything seems to go into fast forward and was over almost before it started.

Despite the amount of page time devoted to inane trivia hardly any time was spent developing the characters.  We get to know Sookie fairly well because she is the narrator but she has to be one of the least interesting heroines I've come across in a long time and I didn't enjoy spending time in her head.  The best thing about her is her telepathic ability and I did enjoy reading about how it effected her daily life and the kind of prejudice that she faces because of it but apart from that she was incredibly boring.

Bill is like a cardboard cut out, I know nothing about him that makes him even a tiny bit interesting and I didn't feel the slightest bit invested in their relationship.  As far as I could tell Bill looks at Sookie as his walking buffet, he takes so much of her blood that she gets sick but then complains when she takes iron tablets because he doesn't like the taste of them - the simple answer there would be for him to stop drinking so much!  Come on, Sookie is badly beaten and knocked out but when she comes round she finds Bill licking her head wounds, creepy much?  I don't care if he is the one that saved her if that had been me I'd have been running a million miles in the opposite direction!  Quite frankly Bill is a control freak, their relationship is at times abusive and not once did I find it sexy, even the love scenes left me cold.

As for Sookie I have no idea what she saw in Bill, there was nothing to him that made me understand the attraction.  She states herself that she has always wanted to meet a vampire and it was like she was attracted to him purely because he is the first one she comes across.  The fact that she can't hear his thoughts is a bonus but I get the feeling that if she had met any other vampire first then Bill wouldn't have got a look in.  We don't really get to know any of the other side characters enough to care about them but I do have a bit of a soft spot for Sam and I absolutely love Eric but it's hard to tell if that's from the book or from the TV show.

I've been told by a lot of people that the series really starts to pick up at book 3 so I am going to try and read at least that far before I discount the whole series but unless the second book is an improvement on this one I'm not sure I'll make it to the end.  I've already mentioned that I seem to be one of the few people who didn't enjoy the book so don't let me put you off trying it but I can personally think of many urban fantasy series that have much stronger starts.

Source: This book was given to me as a Christmas present.

Other Reviews:
Read in a Single Sitting
Mithril Wisdom
If you have reviewed this book on your blog please leave a link to your review in the comments & I'll add the link here.