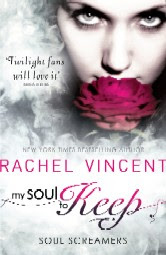 Kaylee has one addiction: her boyfriend Nash

Like Kaylee, Nash is a banshee.  So he understands her like no one else.  Nothing - supernatural or otherwise - can come between them.  That is, until something does.

Demon's breath - a potent paranormal drug with the power to kill.  Somehow the super-addictive substance has made its way to the human world.  Kaylee and Nash need to cut off the source and protect their human friends - one whom is already hooked.

But Kaylee's plans are soon derailed when she uncovers another secret demon's breath addict in their midst.  Nash.

Now she's ready to kick some serious Netherworld butt - but is it too late to save the boy who's stolen her heart?

Review:
I have been really loving the Soul Screamers series but I have to say this was my favourite book so far.  My only major complaint would be the blurb on the UK cover which gives a major spoiler and takes away the surprise of one of the major twists that isn't actually revealed until nearly the end of the book.  I think I'd have enjoyed the story even more if I hadn't read the blurb so I'm not going to read the back of any other books in the series just in case it happens again!  Despite the spoiler I still really loved My Soul to Keep and would highly recommend this entire series to fans of YA urban fantasy.

The story picks up about a month after My Soul to Save finishes and Kaylee has finally been given her freedom back after a month of house arrest (her punishment for her actions in the last book).  She attends a party with Nash and is horrified when she catches the scent of demon's breath on one of their friends.  The dangerous Netherworld drug shouldn't even be in the human realm and is highly addictive and dangerous to humans.  It is up to Kaylee and Nash to find out how their friends got hold of it and try and find a way to stop them from continuing to take it.

Things have never been particularly easy for Kaylee but they take a turn for the worse in My Soul to Keep.  Her relationship with Nash is going downhill fast and she feels pressured to take things further than she feels ready to.  I was impressed that although she loves Nash she refuses to give into his demands and think it gives a really positive message to teenagers not to give into peer pressure.  There is also a strong message about the dangers of drugs, obviously demon's breath isn't really available but a lot of the symptoms and problems it cause are the same as those caused by illegal drugs that we've all heard of.  Hopefully it will make teens think before they are talked into trying something they'll probably regret.  Although there are positive messages within the story it doesn't come across as preachy though which is a good thing.

I have always been a massive fan of Nash but I have to admit there were several times that I wanted to shake him while I was reading this book.  It is going to take quite a bit for him to redeem himself in my eyes and I'll be interested to see if he does it or not.  On the other hand I found myself liking Tod more than ever this time around which was surprising after his actions in the last book.  I do love it when an author can have me completely changing my mind about characters in each book she writes!  I'm really curious to find out more about the new character we meet towards the end of the story, I'm not going to mention names for fear of spoilers but it will be really interesting to see what role he has to play in the next book.  My Soul to Keep really was a fantastic installment to one of my favourite YA series and I can't wait to find out what happens next!

Source: Received for review via Netgalley but I also purchased a UK paperback