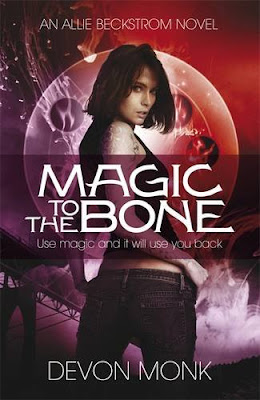 "Using magic, meant it used you back. Forget the fairytale hocus pocus, sparkles and pixie dust crap. Magic, like booze, sex, and drugs, gave as good as it got"

Everything has a cost. And every act of magic exacts a price from its user, maybe a two-day migraine, or losing the memory of your first kiss. But some people want to use magic without paying and they Offload the cost onto innocents. When that happens, it falls to a Hound to identify the spell's caster - and Allie Beckstrom is the best there is.

Daughter of a prominent Portland businessman, Allie would rather moonlight as a Hound than accept the family fortune - and the strings that come with it. But when she discovers a little boy dying from a magic Offload that has her father's signature all over it, Allie is thrown into the high stakes world of corporate espionage and black magic . . .

Review:
In a world where anyone can use magic but it always has a price the more unscrupulous people out there try to find a way to force that price onto unsuspecting victims.  When the price for even the smallest magic use can be a migraine that lasts for days, serious bruising or even memory loss it's no surprise that people who are messing with nasty spells don't want to take their own backlash.  Although there are legal ways to disperse the effects using proxies people often want to take the free, more illegal, option.  Allie Beckstrom is the daughter of one of the most famous and powerful magic users but rather than be forced into joining the family business she would rather go it alone.  Working as a Hound it is her job to investigate the illegal dispersal of magical effects and track down the source of magic so that the user can be punished.  When she is asked to investigate the illegal use of a spell against a young child she tracks the source straight back to the father she hasn't seen for seven years.  But things aren't always what they first appear and the more she investigates the deeper the hole she digs for herself.

Magic to the Bone is an interesting start to a new urban fantasy series, this is a series I've heard a lot about from US bloggers but it is fairly new to the UK with only the first two titles in the series currently available from a UK publisher (hopefully the rest of the series will be following soon).  I really like the world that Devon Monk has created, the idea that using magic has a price was really interesting and I loved the fact that the magic can be tapped into thanks to underground magical cabling.  This was made even better by the fact that the poorest parts of town didn't have the required cabling so become kind of like magical dead zones.

I liked Allie and it was interesting that her use of magic nearly always caused physical pain as well as memory loss, she had to carry around a notebook with her to write down important events in case she couldn't remember them after her next attempt at using magic.  I have to say that apart from the curiosity of her memory loss she doesn't really stand out as a kick ass urban fantasy heroine yet but hopefully that means she has plenty of room to grow as the series continues.  I'm looking forward to seeing how her character shapes up in the next few books.

While I'm very curious about love interest Zayvion I haven't fallen for him yet.  I felt the relationship with him and Allie kind of came out of nowhere and was a bit too rushed.  I would have really liked it if the sexual tension from the beginning of the story could have continued a bit longer as it would have made things more believable.  Zayvion is still quite a mystery, in fact I think he's more of a mystery at the end of the book than he was at the beginning!  I am looking forward to finding out more about him but I'm still not sure if he is 100% trustworthy.  I did really like Allie's friend Nola though and I really hope we see more of both her and Cody as the series continues.

I think Magic to the Bone was a solid start to a series that has a lot of potential if the characters really start to develop in the next installment. I already have a copy of Magic in the Blood and am looking forward to getting stuck into it.