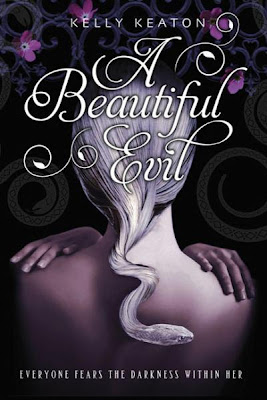 All Ari ever wanted was to know who she really was.  But the truth was beyond her worst nightmare.  A descendant of Medusa, Ari is cursed to become a monster, able to kill with a single look or touch.  Haunted by the horrific image of her future, Ari, along with the brooding, sexy Sebastian, is doing everything she can to find out more about Athena, the goddess who cursed her family and kidnapped young Violet.

But time is running out, and Ari must fight back.  And now, as she prepares to face Athena.  Ari knows she must unleash the very thing she's most afraid of . . . herself.

Review:
I really enjoyed Darkness Becomes Her so was looking forward to reading A Beautiful Evil, I have found that I've been disappointed by quite a few sequels recently though so was a bit nervous that this wouldn't live up to my expectations.  I shouldn't have worried though because if anything Kelly Keaton's second novel was even better than the first.  This really is a fantastic series and I'm looking forward to seeing what happens next.  If you're new to the series but looking for something unusual in the YA paranormal market then I'd highly recommend checking out Darkness Becomes Her, I love the fact that the author has focused on Greek mythology and come up with something completely different to anything else I've read.  This series does need to be read in order though and my review will include a major spoiler for the first book so you might not want to go any further unless you've already read it.

A Beautiful Evil picks up the story just after the ending of the first book.  Ari is trying to come to terms with the fact that she is a descendant of Medusa and that she is turning into a gorgon.  She is scared to learn to use her new abilities but if she wants to have a hope of rescuing Violet from Athena then she is going to have to face her fears.  The more she learns about Athena the harder her task appears to be but luckily she still has good friends who want to help her.

I loved getting to spend more time with Ari's new housemates in this installment.  One of the things I liked the most about the first book was the interaction between the group of misfits who all share an abandoned house in New 2.  We get to see more of Sebastian, Henri, Dub and Crank and learn a few more of their secrets in this book.  I did miss Violet though as we didn't see as much of her this time around but that was completely understandable and I'm hoping she'll have a bigger part to play in the next part of the story.  It is so nice to see that Ari is finally letting people past her defences and learning to rely on her friends.  She spent so long looking after herself that she still finds it hard to trust but she has come a long way since the first book.

Athena is proving herself to be a frightening enemy, she knows exactly how to hit Ari the hardest and enjoys making her suffer.  Ari isn't one to sit back and just let it happen though and she is getting stronger all the time.  I have a feeling the final showdown between the two of them will be explosive and I'm looking forward to seeing what happens.  This series is fast paced and the author always manages to surprise me with a few twists that I didn't see coming.  A Beautiful Evil is a quick and fun read with plenty of action and a hint of romance that has left me keen to pick up the next book.  If you enjoyed Darkness Becomes Her you don't want to miss this one.