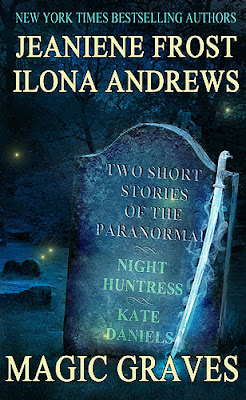 Jeaniene Frost's story, One for the Money, features vampires Cat and Bones trying to protect a spoiled heiress with a price on her head and an undead hitman on her trail. Previously published in Death's Excellent Vacation. Also includes the first three chapters from Jeaniene's story in The Bite Before Christmas anthology, as well as a sneak peek at ONCE BURNED, the first novel in the new Night Prince series.

Ilona Andrews' story, A Questionable Client, is a prequel to her award-winning Kate Daniels series. In a world beset by magic waves, Kate Daniels works as a mercenary. She is tired, hungry, and there is foul-smelling blood on her boots. All she wants to do is to go home, but when Mercenary Guild offers her a job she can't refuse, she finds herself protecting a man against Russian wizards. Previously published in Dark and Stormy Knights. Also includes first two chapters of FATE'S EDGE, book 3 in the Edge series, and first two chapters of Magic Grieves, a Kate Daniels novella.


One for the Money by Jeaniene Frost - 3.5 Stars

Review:
One for the Money is set between Destined for an Early Grave (book 4) and This Side of the Grave (book 5).  Our favourite couple Cat and Bones have had to cut their holiday short to babysit a heiress who has had a contract taken out on her.  I always love spending time with Cat and Bones but would have liked to have seen more of them alone and less of the spoilt brat they were looking after.  This was still an enjoyable short story though and has helped tide me over until the next book in the series is released.

Review:
A Questionable Client is a prequel short story for the Kate Daniels series and shows a bit of Kate's history with the Mercenary Guild and we see her first meeting with shape shifter Saiman.  This is a great introduction to the series and I loved finding out more about Saiman who is a character that intrigued me in the first book Magic Bites.  Although short this story is full of humour and was a quick, enjoyable read that has reminded me how much I liked the first book in this series and has made me keen to continue reading Kate's story.