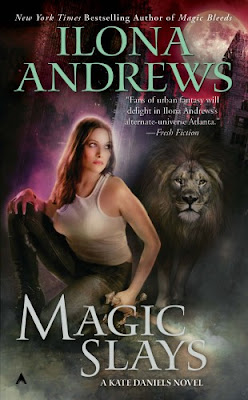 Plagued by a war between magic and technology, Atlanta has never been so deadly. Good thing Kate Daniels is on the job.

Kate Daniels may have quit the Order of the Knights of Merciful Aid but she's still knee-deep in paranormal problems. Or she would be if she could get someone to hire her. Starting her own business has been more challenging than she thought it would be - now that the Order is disparaging her good name. Plus, many potential clients are afraid of getting on the bad side of the beast Lord, who just happens to be Kate's mate.

So when Atlanta's premier Master of the Dead calls to ask for help with a vampire on the loose, Kate leaps at the chance of some paying work. But it turns out that this is not an isolated incident. Kate needs to get to the bottom of it - and fast, or the city and everyone dear to her may pay the ultimate price . . .

Review:
I have been absolutely devouring this series over the last couple of weeks, every single book has had me hooked from the first page and Magic Slays was no exception to that. I love everything about these books - the characters, the action, the world building, everything! - it just all comes together to create what has fast become my favourite urban fantasy series. I think all of my reviews for this series tend to me doing a lot of fan girl squeeing and I'm afraid this one will probably be no different but I'll try to be at least a little objective.

The pace of Magic Slays starts out a little slower than the previous books, that isn't a negative because it means the authors are giving more focus to developing the various characters and their relationships. Of course Kate and Curran have always captured my full attention, I love the way their relationship has grown throughout the series and there are some wonderfully poignant moments between them in this book. They still have their ups and downs and there are definitely issues that they need to work on but they're both prepared to put the effort in and you just know they're going to make it. I just can't get enough of seeing them together, their banter always makes me smile and I definitely spend a lot of time swooning over Curran. Kate is facing some interesting challenges from the rest of the shapeshifers now that she is Curran's mate, she is having to learn pack politics and she is constantly being tested by the other alphas who make up Curran's council but she handles everything they throw at her and puts them back in their place with ease. There is nothing I enjoy more than watching Kate kick ass and she does that quite a lot in this book!

It isn't just Kate's relationship with Curran that is the focus of this story though. We learn more about Kate's background and my heart just broke for her when her world is turned upside down. I think we're going to be in for some interesting new developments once she has had time to digest everything. We also get to see a lot more of her friendship with Andrea and I'm so happy that the pair of them are now working together because they are a lot of fun to spend time with. We're also getting to know the new Derek, he has changed a lot from the young man that Kate first met, everything he has been through has left him with physical and emotional scars but he is a fighter and he refuses to give up.

Although the pace is slower in the first half of the book the action is off the charts towards the end. Kate and Curran are literally facing the end of the world as they know it - you know it's got to be bad if the shapeshifters and the People are prepared to work together against a common threat! Anyone who hasn't already started this series really doesn't know what they are missing, trust me once you've read the first book there will be no going back and you'll fall just as madly in love with these books (and Curran!) as I have.