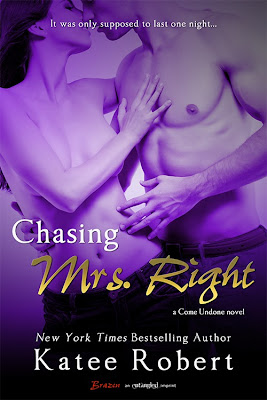 It was only supposed to last one night . . .

Roxanne Stokes doesn’t believe in love. She does, however, believe in the sexy-as-sin stranger who literally knocks her off her feet in front of a nightclub. The chemistry sparking between them takes her breath away, and she’ll do anything to ease the pain in his eyes . . . until she realizes the handsome stranger is her best friend’s older brother who’s just come home from war.

Ian Walser had no idea the gorgeous woman he slept with the night of his homecoming party was his little sister’s best friend—or that she’d be gone before morning. Roxanne’s touch soothes him in a way nothing else can, and he’s not ready to walk away from that yet. Not when spending time with her gave Ian a glimpse of everything he’s ever wanted.

When his sister unwittingly pushes them together, he sees his chance. But convincing a woman who doesn’t believe in love that she’s his Mrs. Right might be harder than any mission Ian’s undertaken. Good thing this soldier likes a challenge . . .

Review:
Ian has just returned home from a tour of Afghanistan, he is suffering from PTSD and just needs some peace and quiet to unwind and get used to civilian life. He finds it difficult to be in enclosed spaces or around large crowds so the surprise party his family have organised for him is actually his worst nightmare. Roxanne is a much needed distraction and he is more than happy to act of the chemistry that is sizzling between them. Ian doesn't want just one night with his mystery woman though so when he wakes up the next morning and finds she has walked out on him he's disappointed. Roxanne grew up watching her mother go from one relationship disaster to another and the last thing she wants is anything serious. She doesn't believe in love but she can't deny her attraction to Ian. What she doesn't realise is that Ian is her best friend Elle's brother and when her friend throws the two of them together her one night stand suddenly gets a lot more complicated. Can Ian convince Roxanne to take a chance on love?

I absolutely loved Wrong Bed, Right Guy so when I found out it was the first book in a series I knew I had to add Chasing Mrs. Right to my wish list. I've actually had this book on my to read pile for months though so I really have no excuse for not reading it sooner. I'm glad I finally got around to reading it because it was one HAWT read. If you thought the chemistry between Gabe and Elle was scorching in the first book you've not seen anything yet, Ian and Roxanne are off the charts! They're both very outgoing and love to get down and dirty when there is a risk of getting caught so there is plenty of messing around in public that will definitely leave you in need of a cold shower!

I absolutely loved Ian, he is damaged and hurting from everything he has been through but he is determined to pick up the pieces and build a life for himself. Roxanne constantly pushes him away but he sees through her fear and is determined to make her see that they could have a future together. I was really pleased that Roxanne's issues didn't become a huge obstacle for them, she was wary of being hurt and wasn't sure about the idea of starting a relationship but it doesn't take long before she realises that Ian is worth fighting for and when he really needs her at his side she comes through for him. They make a great couple and I loved the way Roxanne encouraged Ian to follow his dreams rather than give in to what his controlling mother wanted him to do.

It was also really nice to catch up with Elle and Gabe to see how they're getting on now. I'll admit I was a little annoyed at Ian's reaction to Gabe, I know he was protective of his sister but considering Gabe's brother is Ian's best friend Nathan you'd think he would be prepared to give him the benefit of the doubt. That was a minor irritation though and I was glad they worked things out in the end. I'm definitely looking forward to reading Nathan's story in Two Wrongs, One Right, I have a feeling he's going to be a fabulous tortured hero which just happens to be one of my favourite types! If you enjoyed Wrong Bed, Right Guy then you won't want to miss Chasing Mrs. Right, they're both fabulous stories so although they can both be read as stand alone books I'd recommend reading the series in order. Katee Robert is definitely an expert at writing realistic characters with scorching hot chemistry and I can't wait to read more from her in the future.