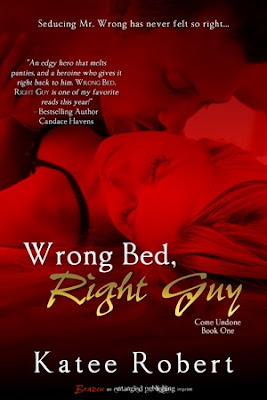 Prim and proper art gallery coordinator Elle Walser is no good at seducing men. Heck, she’s been throwing hints at her boss for months, but he’s completely clueless. Desperate to escape her mother’s matchmaking efforts, she comes up with a plan—buy some lingerie and climb into her boss’s bed. The plan goes brilliantly…until she accidentally seduces a sexy stranger instead.

Bad boy nightclub mogul Gabe Schultz just had the best almost-sex of his life. Too bad the smoking hot blonde thought he was his brother and bolted before he could finish what they started. Though her holier-than-thou attitude puts a serious damper on his mood, Gabe’s never been one to give up on something he wants. And he wants Elle. But does a man who lives on the dark side really have a chance with a proper lady?

Review:
Ultimate good girl Elle had a nasty experience with her bad boy ex boyfriend and has sworn off the dark and brooding type ever since. Her mother is determined to set her up with someone suitable but Elle decides to take matters into her own hands in the hope that she ends up with someone that she at least has something in common with. She may not be physically attracted to her boss Nathan but they have a lot of shared interests he is a very good friend. He is also just the kind of guy that she could take home to meet her family. She has been dropping hints for months with no results so she decides to take matters into her own hands and climb into bed with him. She's in for quite a shock when she realises that the guy she's getting hot and heavy with isn't Nathan after all - in fact he's a complete stranger! Nathan's older brother Gabe thought he was dreaming when Elle climbed in his bed to seduce him, she may have disappeared after realising who he was but Gabe has had a taste of her and he wants more. Can he convince Elle to look past his tattoos and bad boy exterior and take a chance on the man underneath?

I have to admit that it took me a while to warm to Elle, she comes across as quite a snob at the beginning of the story and I was irritated by the way she looked down on Gabe just because he had tattoos. I get easily irritated by people like that but I had to keep reading because I adore men like Gabe! As it turned out Elle did grow on me, she had reasons to be wary of bad boys and I think anyone who had been through something as humiliating as she had would probably be emotionally scarred by it. As she starts to get to know Gabe and opens up to him you start to see a softer side to her and one that is drawn to Gabe for all the right reasons. The fact that they are so different from each other made for absolutely wonderful banter between them and there were several times I laughed out loud watching them argue.

I've already mentioned that I love men like Gabe so it will come as no surprise when I tell you I have a new fictional crush! He is totally hot and sexy with incredible tattoos and a body to die for and I think he'd be a lot of fun to date. Underneath his bad boy exterior he has a heart of gold and all he really wants is a family of his own. He was absolutely adorable the way he looked after Elle when she had an allergic reaction and if I hadn't already been crushing on him that would have done it. This is an erotic romance and I can tell you right now that the couple has off the charts chemistry, the tension between them literally sizzles and leaves you desperate for him to talk her round.

My only disappointment with the story was that it ended - I just wanted to spend more time with these characters! Luckily I have since found out that there will be another two books in the series, each will focus on a different couple (both Nathan and Elle's brother Ian will get their own story) but according to Katee Robert's website we will still get to see plenty more of Gabe and Elle. I can tell you one thing, both of these sequels will be going straight to the top of my wish list and I can't wait to read more from Katee Robert! If you're looking for a fun, sexy romance then Wrong Bed, Right Guy should be at the top of your list.