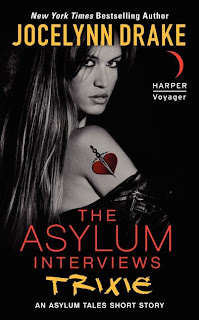 Gage's ex-girlfriend is back in town and needs help escaping a master vampire. While not the easiest of tasks, he certainly didn't count of getting help from a mysterious woman with a few secrets of her own.

Review:
This is the second of two prequel novellas introducing the main characters of Jocelynn Drake's upcoming Asylum Tales series. These novellas are both narrated by Gage who is the owner of the Asylum Tattoo Parlour. The first story introduced us to tattoo artist Bronx and showed how he ended up working at Asylum. The Asylum Interviews: Trixie is set 18 months after the first novella and introduces us to another new tattoo artist - Trixie.

Gage's ex-girlfriend Jo has returned to town and the attraction between them is still sizzling. He is worried that she doesn't seem to be quite her usual self but it takes Jo's friend Trixie to fill him in on the problem. Jo is being bullied by a master vampire and tattoo artist Trixie comes to Gage looking for help to put a stop to it. Can Gage, Trixie and Bronx find a way to free Jo from the vampire's clutches?

Gage and Bronx have been working together for over a year and things at the tattoo parlour are busier than ever. They have become good friends but both are suffering from overwork and they really need another artist to help take some of the pressure off. They need to find someone that they will both get on with though and it has to be someone who is as skilled at both creating tattoos and making the special potions they use in the ink too. Will they get on well enough with Trixie to offer her the job?

We don't find out much more about Gage's past in this story but he does seem to gravitate towards people who also have secrets of their own. He doesn't push them for answers and he knows they're not likely to want to delve into his past either. Trixie is hiding her true identity and I'll be very interested to find out why that is as the series continues. As much as we don't get to find out more about Gage's secret past we do get to know his character a bit better. I am really coming to like all of these characters, Gage can come across as a bit of an ass at times but that is his way of keeping people at a distance and deep down he is a nice, caring guy. Bronx always manages to add humour to any situation but he is definitely the kind of guy you'd like to have at your back if you're in trouble and Trixie is a straight talking, spunky woman who won't take any crap but who will risk herself to protect her friends.

If you enjoyed The Asylum Interviews: Bronx then you'll love Trixie's story just as much. You don't have to read either of these novellas before picking up the first book in the series but I would recommend giving them a try. These stories have left me eager to get started on Angel's Ink - this is definitely a new urban fantasy series to watch out for.