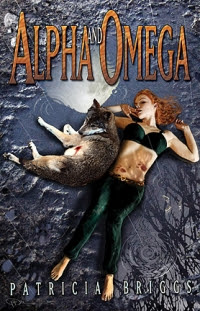 In Cry Wolf, New York Times bestselling author Patricia Briggs started a new urban fantasy series set in the world of Mercy Thompson -- but with rules of its own. Now, read "Alpha and Omega," the novella that inspired the new series, and see how it all began...Anna Latham never knew werewolves existed, until the night she survived a violent attack... and became one herself. After three years at the bottom of the Chicago pack, she's learned to keep her head down and never, ever trust dominant males. But when she discovers wrongdoing in her pack, she has to go above her Alpha's head to ask for help.Charles Cornick is the son -- and enforcer -- of the leader of the North American werewolves. Now his father has sent him to Chicago to clean up a problem there. Charles never expected to find Anna, a rare Omega wolf -- and he certainly never expected to recognize her as his mate...

This novella was originally published in the On the Prowl anthology but has also been printed in a limited edition hardback.

Alpha and Omega Series:(This is a spin off to the Mercy Thompson series)
Alpha and Omega (novella found in the On the Prowl anthology)
Cry Wolf
Hunting Ground
Fair Game
Dead Heat
Burn Bright

Review:
Anna has been at the bottom of her pack ever since she was turned into a werewolf during a brutal attack. She knows all about the horrors that can and are inflicted by alpha males and has learnt to be wary around them. She finally plucks up courage to ask for help when she sees a newspaper article about a missing boy - a boy she has seen being held prisoner by members of her pack. She contacts the Marrock Bran (leader of the North American werewolves) but she isn't sure she can trust him to help her - he must be a powerful male after all. Bran sends his son and the pack enforcer Charles to investigate the Chicago pack, Charles hates the city and would much rather remain at home in the mountains but he has a job to do. He wasn't expecting to find himself attracted to Anna and is even more shocked when his wolf recognises her as his mate. He quickly realises that Anna is a rare omega wolf and becomes determined to understand why she has been so badly abused by her pack.

I first read the On the Prowl anthology a couple of years ago but never got around to continuing with the Alpha and Omega series. I decided it would probably be best to re-read the Alpha and Omega novella before picking up Cry Wolf and I'm really glad I did. I think you're much better off reading this before the first novel or you'll be missing out on Charles and Anna's first meeting. This novella also gives us better insight into Anna's change into a werewolf and the things she suffered at the hands of other pack members and her previous Alpha. If you're familiar with the Mercy Thompson series then you'll probably recognise the missing boy as the one in Moon Called but although I highly recommend those books (it's one of my favourite UF series) you don't need to have read them to enjoy Alpha and Omega.

I had forgotten how much I love Anna and Charles, they make such a great couple which is something you really start to see in the next book but this story focuses more on Charles gaining Anna's trust than any kind of romance. The mystery surrounding what is happening within Anna's pack was engaging and I didn't want to put the book down for any reason. If you're a fan of the Mercy Thompson series then you'll love Alpha and Omega as much if not more and if you've not read anything by Patricia Briggs before then this wouldn't be a bad place to start. She really is one of my favourite urban fantasy authors and I can't recommend her books highly enough!

Source: Purchased (as part of the On the Prowl anthology)