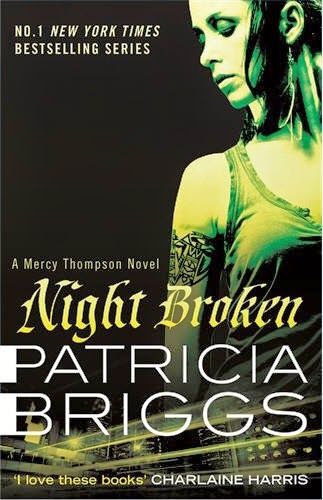 An unexpected phone call heralds a new challenge for Mercy. Her mate Adam’s ex-wife is in trouble, on the run from her new boyfriend. Adam isn’t the kind of man to turn away a person in need—and Mercy knows it. But with Christy holed up in Adam’s house, Mercy can’t shake the feeling that something about the situation isn’t right.

Soon, her suspicions are confirmed when she learns that Christy has the farthest thing from good intentions. She wants Adam back and she’s willing to do whatever it takes to make it happen, including turning Adam’s pack against Mercy.

Mercy isn’t about to step down without a fight, but there’s a more dangerous threat circling. Christy’s ex is more than a bad man—in fact, he may not be human at all. As the bodies start piling up, Mercy must put her personal troubles aside to face a creature with the power to tear her whole world apart.

Review:
It's no secret I'm a huge fan of the Mercy Thompson series, I'm incredibly invested in these characters and I adore Mercy and Adam as a couple. I have to admit I was nervous about picking up Night Broken because Adam's ex-wife Christy is back on the scene and ready to cause trouble. I was worried that she would find a way to come between Mercy and Adam and put a spanner in their relationship and I would have been devastated if that was the case. Thankfully I needn't have worried, yes, Christy tries to cause trouble and yes, she manages to get some of the pack on her side but not once did I get the feeling she would cause a split between Adam and Mercy.

Mercy is a bigger woman than I am and when she heard that Christy was in trouble she knew she had to offer her a safe place to stay. No matter how much she didn't want Christy around she gritted her teeth and got on with it. Christy is without a doubt a bitch, I absolutely hated her and the way she was so good at twisting things to make herself look good. She's really quite pathetic and takes no responsibility for her own actions, preferring to blame it on someone else and take the easy way out. I can't tell you how annoyed I was that most of the Pack couldn't see what she was doing. She manipulates them like a pro and it doesn't take long for them to turn on Mercy which makes me so mad I can't see straight. Even though Christy does everything she can to make Mercy jealous I was proud of Mercy for being so secure in her relationship, she never once doubts that Adam is hers and she would never let anything happen to change that. I love that they have such a strong relationship and I love Adam more than ever for the way he stands up for Mercy. I also have to mention that Mercy's revenge at the very end of the book was absolutely priceless!

It was nice to see that Mercy has a few unexpected allies within the pack, a couple of people who I expected to side with Christy didn't but unfortunately the majority of them would take any excuse to get rid of the unwanted coyote. I was annoyed on Mercy's behalf but I think more than anything I was annoyed for Adam. He has given up so much to protect them all, he has been loyal to them and cared for them and even though they all know that Mercy is his world they refuse to accept her. I really hope that Adam puts his foot down soon and that everyone is told in no uncertain terms to suck it up or get lost. Thankfully there is one particular scene that I think shows Mercy starting to gain the pack's respect but seriously how much more does the woman have to go through to prove she is worthy of Adam? She's fought with them, bled with them, suffered more than any woman should ever have to go through and even risked her life to protect Adam so there has to come a point when enough is enough.

Alongside the drama that Christy brings to the table there is also plenty of action thanks to the enemy she has hot on her heels. The pack are facing off against a powerful foe who could destroy them all if they're not willing to hand Christy over. Mercy also has an unexpected visit from one of the grey lords thanks to the fae artefact that she gave to Coyote and she's now in a very difficult situation. Night Broken is another fab instalment to the series and I'm just gutted that I now have to settle in and wait for the next book to be released.