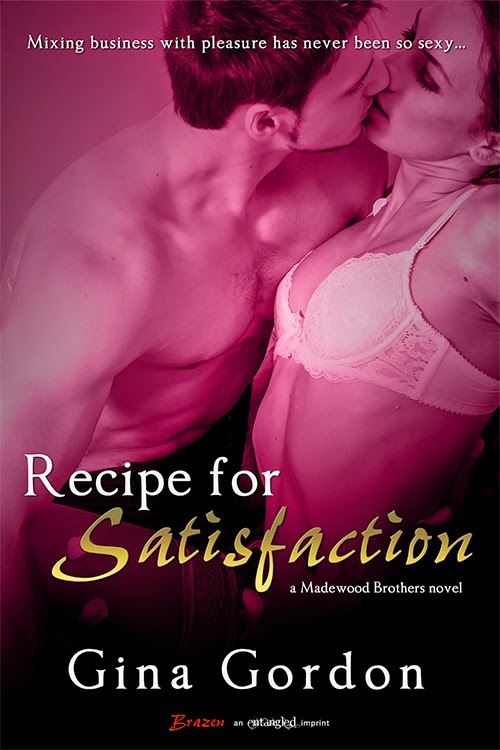 Mixing business with pleasure has never been so sexy...

Being the financial caretaker for her deadbeat parents isn’t the life professional organizer Sterling Andrews dreamed of. Tired of being the dependable—and boring—daughter, Sterling decides to have a little fun. And what could be more fun than seducing rich bad boy chef, Jack Vaughn? Except, after one scintillating night together, Sterling’s not only lusting for Jack, she’s working for him. And remaining professional becomes harder every day.

Already a major success thanks to his exclusive restaurants, Jack Vaughn is looking for something more. Ultra responsible Sterling is unlike anyone Jack has met…but she’s his employee. Unwilling to give her up, Jack makes Sterling an offer she can’t refuse—for four sexy weekends, he’ll indulge her most wicked fantasies with no professional strings attached. But will mixing business with pleasure spell disaster? Or will they find the recipe for satisfaction?

Review:
While I enjoyed Recipe for Satisfaction I have to admit I didn't love it as much as I expected to and I'm having a hard time figuring out why. Technically it had everything you want from this kind of story - there is plenty of hot sex and a few sweet moments between the main characters, I also enjoyed meeting the other brothers and would definitely like to read more about all of them but in spite of all of that there was still something missing from this book.

I think it's partly because everything feels so rushed between them, Sterling and Jack have only met a couple of times when they both start thinking of how perfect they could be together and dreaming of the future. OK it takes them a while to express it and the "I love you" declarations don't come until right at the end but I would have liked them to spend more time getting to know each other outside of the bedroom before they start picturing forever. There is a lot of sex, almost too much, and at times it made me feel more uncomfortable than turned on because it just didn't feel natural to the characters. The scene at the nudist beach in particular was just weird and I couldn't imagine Sterling going along with it.

I would also have liked Sterling's family situation to have been expanded on more. Her parents have obviously been bleeding her dry financially for years and she just lets them get away with it because she feels like she has to protect her younger sisters. I could kind of get why she felt like that but her parents lie, cheat and outright steal from her making it practically impossible for her to provide for herself after she's paid their mortgage and covered their bills and gambolling debts. I wanted to see her stand up for herself and tell them that she wouldn't let them walk all over here any more. There is a brief mention of her making changes towards the end of the book but we don't get to see the confrontation with her family which was disappointing.

The other thing that irritated me was Jack's grand gesture at the end of the book, I've never been one to be persuaded by that kind of public display so I know that this won't bother other people as much as it did me, but I think after the way he treated Sterling she deserved a proper one to one apology. I would have liked to see him grovel a bit rather than have her falling into his arms quite so easily after he'd treated her badly and then left her hanging for a week thinking he'd walked out of her life forever. I would have found it more satisfying if they'd actually had a proper, grown up conversation about her family situation and worked out a solution together. He could even have helped her confront her parents and I'm sure he is the kind of guy who would happily have helped her look after her sisters.

I know I've had mentioned quite a few things I didn't like about the story but it wasn't all bad and I did like it enough to want to carry on reading the series. Both Jack and Sterling are likeable and Jack is definitely the kind of guy any woman would be happy to fall for. I think the other characters we've met all have a lot of potential and I loved the set up of four foster brothers who have all come such a long way from their humble backgrounds. They are all chefs (and there is something incredibly sexy about a man who knows how to cook!) but they also give back to the community through the Madewood foundation that their adoptive mother set up. I'm just hoping that future books in the series will spend more time showing the characters getting to know each other outside the bedroom as well as in it.