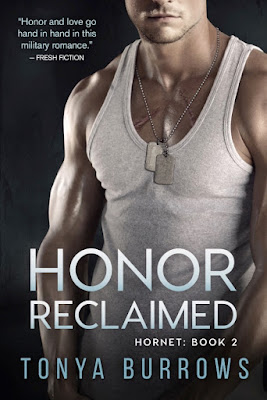 Former Marine sniper Seth Harlan is new to HORNET and anxious to prove he can still do his job despite an ongoing battle with PTSD. He remembers all too well what it’s like to sit inside an enemy camp, praying for rescue and waiting for death, so when a wounded veteran contacts HORNET to rescue a buddy that got left behind, all sorts of nasty memories strain his newfound stability.

An interview with a runaway Afghani child bride leads photojournalist Phoebe Leighton to an arms deal involving a suitcase bomb powerful enough to wipe out a mid-sized town, and she realizes this is one battle she can’t win on her own. Forming an unlikely alliance with a ragtag team of military and government delinquents, she meets Seth, a sniper carrying as many emotional scars as physical, who impresses her with his steely will and ignites passions within her she thought long dead.

Suddenly this mission is about a lot more than an abandoned soldier. Racing against the clock, Seth, Phoebe, and the rest of HORNET struggle to stop that bomb before it reaches its final destination: The United States.

Review:
I've become a huge fan of Tonya Burrows since I read SEAL of Honor last year and I love both her HORNET and Wilde Security series. I've been dying to find out more about Seth since he was first introduced in Wilde Nights in Paradise so to say I had high hopes for Honor Reclaimed is an understatement and I'm very happy to say that it's now my favourite book by this author. If you're new to this series I'd highly recommend reading SEAL of Honor first because there is a lot going on within the team that you'll only know about if you've read their entire history. The HORNET books do have a slight crossover of characters with the Wilde Security series and there is a suggested reading order on the author's website but both series can be read entirely separately if you prefer.

Seth is an ex-marine and the newest member of the HORNET team, he spent 15 months as a prisoner of war in Afghanistan and the torture he endured has left him both physically and mentally scarred. He's suffering from extreme PTSD and the rest of the team don't trust him not to fall apart in a difficult situation so he hasn't exactly been made to feel welcome. When Greer Wilde asks for their help rescuing a fellow soldier who was captured in a very similar situation to Seth the team pull out all the stops to get to Afghanistan to rescue him. It means Seth facing his worst nightmares but there is no way he can leave someone in enemy hands when he knows exactly the kind of torture he will be subjected to.

Phoebe is a photojournalist who travels to some of the world's most dangerous places investigating women's rights and she is in Afghanistan helping her friend with a shelter she has set up for women and girls whose lives are at risk. The newest resident at the shelter, a young girl who was forced to marry a terrorist and who nearly ended up as an unwilling suicide bomber, gives Phoebe information about an attack her husband is planning. Phoebe knows she can't stop the attack on her own and she turns to Seth and the rest of the HORNET team for their help.

I love a damaged hero and Seth is about as damaged as they come. He may have recovered physically from his injuries (apart from the scarring anyway) but he is an emotional wreck. He has no self esteem, doesn't feel connected to the rest of his team and most of the time he feels completely worthless and subhuman. My heart absolutely broke for him and the more we found out about what he had suffered the more amazed I was that he'd even survived. There are some quite distressing scenes of torture - not just flashbacks from Seth but also of the newly captured hostage Zak who the team are out there hoping to rescue - but none of it is gratuitous and it didn't overshadow the rest of the story. Just knowing that there are soldiers who have probable been in (or are currently in) that kind of terrifying situation is horrifying though and it gives you a new appreciation for the risks our armed forces take with their lives.

Phoebe is a great heroine for Seth, he pushes away the people he cares about because he's scared to let anyone close but Phoebe sees through that and calls him out when he acts like an idiot. She refuses to let him get away with anything and he needs someone who is going to be forceful with him and not put up with his crap. I loved that she saw through his scars and saw the man he really is, she wanted to give him more self confidence but she loved him in spite of his prickly personality and the way he constantly pushed her away. They are well matched personality wise and I loved how brave and feisty she was, it doesn't hurt that they have fantastic chemistry too.

I was so annoyed with how unsupportive the rest of the team was of Seth in the beginning. It's a difficult situation because they need to be able to trust that he's not going to break down when they need him the most and end up putting all of their lives at risk so I could understand why they were wary of him but at the same time I desperately wanted them to give him a chance and start treating him better. Ian in particular was really annoying me and I enjoyed seeing him get taken to task by Phoebe. The team is still fairly new and they're all getting used to working together which leads to some interesting situations but I enjoyed the banter and watching them all bond more by the end of the book. This series definitely has more focus on the action so while the romance never takes a back seat there is a lot more going on alongside it. The team are risking their lives in the hope of saving Zak and there are some nail biting sections when I was really worried that not everyone was going to make it out alive. Honor Reclaimed brought me to tears on more than one occasion and I loved every minute of it. I can't wait to see the rest of the team all get their own happy endings and I'm excited that we still have so many books to look forward to.