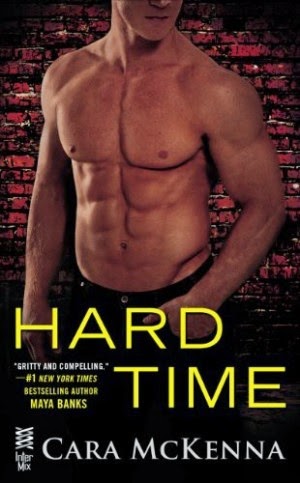 In this all-new novel from the author of Unbound, a woman with a rocky past finds romance in the last place she’d ever expect...

Annie Goodhouse doesn't need to be warned about bad boys; good sense and an abusive ex have given her plenty of reasons to play it safe. But when she steps into her new role as outreach librarian for Cousins Correctional Facility, no amount of good sense can keep her mind—or eyes—off inmate Eric Collier.

Eric doesn't claim to be innocent of the crime that landed him in prison. In fact, he’d do it again if that’s what it took to keep his family safe. Loyalty and force are what he knows. But meeting Annie makes him want to know more.

When Eric begins courting Annie through letters, they embark on a reckless, secret romance—a forbidden fantasy that neither imagines could ever be real…until early parole for Eric changes everything, and forces them both to face a past they can’t forget, and a desire they can’t deny.

Review:
I absolutely loved Unbound when I read it last year so when I found out Cara McKenna was writing a romance about a librarian and a prisoner I couldn't wait to read it. This author always writes about unlikely heroes, the kind of guy you would probably be wary of if you met them in real life, but she always makes them utterly compelling to read about. I was sceptical about the idea of a romance that starts in a prison between a convicted felon and the librarian who visits the prison each week to teach classes and assist the inmates. I'll fully admit that I went into this one half expecting not to like it but I was sure if anyone could sell me on this kind of story it would be Cara McKenna and I was right - she totally did it and I definitely developed a crush on Eric!

The one thing I was a little disappointed with was that I felt the relationship between Annie and Eric started a little too quickly. I could completely understand Annie being drawn to the sexy bad boy and of course Eric was going to be attracted to the first pretty woman he's had contact with since he was locked up but I would have liked for them to have had a few more normal conversations and got to know each other a little better before they started exchanging dirty letters. It didn't take me too long to put that to one side though because I absolutely LOVED the letters that Eric wrote to her and I don't think there is a woman between the ages of 18 and 90 who wouldn't find their heart racing at least a little if they were the recipient of letters like that! Eric has a learning disability so writing isn't his strong point but the contents of his letters are so incredibly sexy and they were probably my favourite part of the book.

Annie escaped from an abusive partner five years ago but it has left her completely wary of men and relationships. You might think that the idea of dating a prisoner (especially when she has no idea what his crimes were only that his sentence was 10 years so it must be something serious) would be terrifying for her but he's actually kind of a safe option. She gets to write and receive these amazing letters, to feel sexy and attractive, but she never has to risk getting hurt. Whenever she is face to face with Eric they are surrounded by guards so as much as they can't touch and kiss like a normal couple he wouldn't be able to hit her like her ex did either. For Annie flirting with Eric is the perfect way of fulfilling her fantasies in a pretty safe environment.

Their problems really start when Eric gets released early for good behaviour and Annie has to decide whether she can trust him enough to let him into her real life in the outside world. Eric shows no remorse for his crimes (and if I'm honest I don't really blame him for the actions that got him sent to prison in the first place) and that is something Annie really struggles to deal with. There is a lot for both of them to work through if they're going to be able to make a success of their relationship and it doesn't help that Eric can't promise Annie that he wouldn't do the same thing again if the situation called for it. She is fearful that he will end up back inside and she'll be left alone again.

Hard Time is an unlikely romance and Eric isn't your average hero but that doesn't make it any less addictive to read and I enjoyed every minute of it. Annie and Eric's relationship is intense, seductive, compelling and their chemistry is off the charts. Cara McKenna added herself to my must read authors list with Unbound and this book just proves she belongs there.