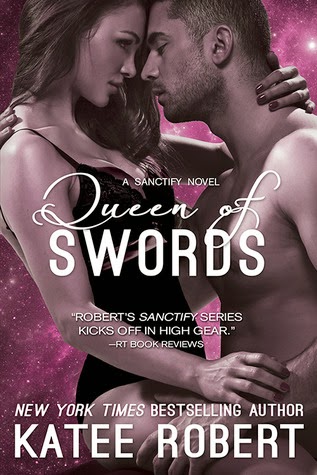 When the cards tell Ophelia Leoni she's supposed to marry the Prince of Hansarda, the gunrunner grits her teeth and boards the starship that comes for her. It doesn't matter if the ship's commander is the gorgeous stranger she just spent a wild, drunken night with. As a Diviner, she’s painfully aware the cards don't lie. Ever.

Boone O’Keirna knows Ophelia is trouble the second he sees the way she moves. Not about to let the deadly little hellcat marry his sadistic half-brother, Boone pretends to be the Prince’s emissary and kidnaps Ophelia. Too bad they can’t be in the same room without him wanting to throw her out an airlock–or into bed.

Even as they fight each other–and their explosive attraction–Ophelia and Boone sense something is wrong. Too much is going their way. Soon, they realize while the cards may never lie, the truth is sometimes hidden between them...and the future king of Hansarda is not one to take defeat lying down.

Review:
I don't often read this kind of sci-fi romance but I love Katee Robert's contemporary romance series so I jumped at the chance of reading Queen of Swords when I was offered a review copy. I'm happy to say I was impressed, the author has created an interesting universe with diverse species of alien characters and she gives us enough information to build a good picture of things without overwhelming us with unnecessary details. None of the terms used are too complicated so the story is very easy to follow and there are enough technological advances to be interesting but not confusing.

Ophelia is from a race known as the Diviners, they have a strong connection with the Lady (their equivalent of god) and they use tarot cards to seek guidance and figure out what path they should take. Ophelia's readings are all telling her that she needs to marry the prince of Hansarda so no matter how much she hates the idea of marrying a stranger who is probably only interested in her because of her father's contacts as a gun runner she will accept his proposal because bad things happen when you don't follow the Lady's path. The cards are always open to interpretation though so even though she thinks she knows what she has to do it could be that she's misreading the situation.

Boone is the half-brother to the prince and also happens to be the sexy stranger she just spend a night with. When he tells Ophelia that it is his job to take her to Hansarda for her marriage she agrees to go with him but Boone actually has other plans. Prince Kristian is Boone's enemy and Boone plans to kidnap Ophelia to stop the wedding from going ahead. Boone will do whatever it takes to protect his people and that means stopping Kristian becoming the King of Hansarda, no matter what it costs him.

I really loved both of the main characters, they're both strong, capable fighters who are determined to do what they believe is the right thing. Most of the time Ophelia and Boone manage to rub each other up the wrong way but no matter how fierce their arguments you can always sense the underlying chemistry between them and you know they are going to be absolutely explosive together when they eventually give in to that passion. Alongside the main couple we also get to meet a variety of other well developed characters, Boone's sister Jenny was definitely a favourite and I'm glad that her book is next in the series.

Queen of Swords is a fun read with great romance and plenty of action and intrigue. I should probably mention that there is a prequel novella called The High Priestess (which actually features Ophelia's parents) but since I haven't read that story yet I can confirm that this one works well as a stand alone. I'll definitely be continuing this series when Queen of Wands comes out, there is a lot going on with the religious cult Sanctify and I'm looking forward to seeing how that resolves itself.