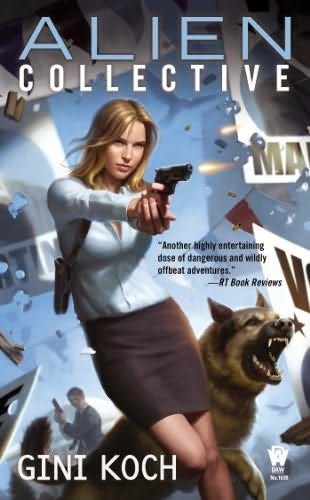 Despite not having run for office, nor wanting to remain in office, Representative Jeff Martini is being wooed as the vice presidential running mate for Senator Vincent Armstrong. They're up against a virulent anti-alien ticket supported by the Church of Intolerance, Clun 51, and a host of other enemies. Plus an influential gossip columnist called the Tastemaker has them in his sights.

While the Diplomatic Corps has to deal with a political campaign that is sure to uncover secrets they don't want shared with the world, Ambassador Kitty Katt-Martini has additional worries.

Tracking down the hidden Yates Offspring before their enemies can find them has been hindered by the devastating damage done to Centaurion Division's data and personnel during Operation Infiltration. But they need to find these hybrids and super-talented A-Cs to have any hope of fighting what's coming.

Bio-weapon attacks that force the evacuation of the American Centaurion, Bahraini, and Israeli embassies, along with bombs exploding all over D.C. and at major U.S. Centaurion Division Bases are bad news. But a little old lady in deadly danger because she knows much more than she realises and the emergence of the bad guys' Patient Zero complicate the mix even more. And the arrival of a new superconsciousness determined to find ACE guilty of the crime of interference sets the stakes way too high - and the coming confrontation could expose Algar, too!

Kitty's in the middle of a Battle Royale that will decide more than just the next president of the United States - it's going to decide the fate of the world . . . and possibly the galaxy.

Review:
It's no secret that I'm a HUGE fan of Gini Koch's alien series, I love how fast paced these stories are and the fact that they are so full of humour and crazy antics! Alien Collective is once again a fabulous instalment to the series and I loved every minute of it. It always amazes me that Gini Koch continues to come up with so many hilarious ways to challenge (or should that be torture?) her characters, we've seen the superbeings, alligators, poofs and peregrines to name a few but I'm just going to leave it for you to discover what she throws at them in this book.

Even though Alien Collective sees Jeff running for vice president the focus is still very much on the action and Kitty is given plenty of chances to kick ass and take names. The story is set about a year on from Alien Research but the A-Cs are still struggling to recover the data that was stolen by the hacker Chernobog. With years worth of research completely lost they are scrambling to catch up and their enemies are at a distinct advantage. Kitty knows it is vital to track down the remaining Yates offspring before their enemies do, the hybrids all seem to have unusual and very strong abilities and the last thing Kitty needs is them allying with the mastermind, but finding them is easier said than done.

The blows just never stop coming at them in this book, what with attacks on their embassy as well as those of their allies and multiple bombing attempts in strategic locations worldwide Kitty and the team have a lot on their hands. Add in an alien visitor who has come to put ACE on trial along with some very unusual attacks on Kitty herself and things are about to get even more complicated. Luckily Kitty has some powerful friends and her "uncles" are a great source of useful information for her. She is getting closer to discovering who the real mastermind is and it's looking more and more like it is someone in her close circle, someone she considers not just a friend but part of her family. I'm actually kind of terrified to discover who the mastermind is, I have a feeling it's going to shock us all and I'm nervous that it's going to end up being a character that I love. I would hate to even make a guess at who it is though, the court is just wide open at this point and it really could turn out to be anyone.

I can't get enough of this series and I'm sure fans are going to love this latest instalment, it has everything you'd expect from Gini Koch and is just as addictive as the other books. It's unusual for a series to still be going strong after 9 books but I can't see myself ever getting bored of Kitty and crew so I can't tell you how excited I am to know there will be at least 4 more books. Each new release just can't come fast enough!

Source: Received from the DAW Books in exchange for an honest review