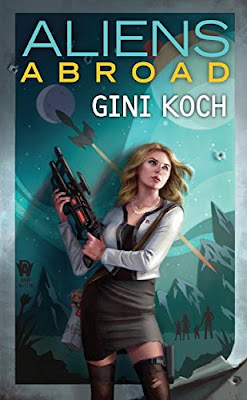 With the human population growing and alien refugees pouring in from around the galaxy, Earth is becoming too overcrowded to sustain itself--and the solar system is filling up with the alien overflow. Advanced technology from the Alpha Centauri and Vatusan systems offers one possible solution. It's time to explore new planets and see if any uninhabited ones can be claimed.

The President and First Lady, aka Jeff and Kitty Katt-Martini, aren't supposed to be on this mission, but what looks like a snafu during a political photo op on the newly christened Distant Voyager spaceship turns out to be a call for help from a planet that might be Earth's salvation...or its destruction.

The discovery of a world at the opposite end of the galaxy that seems like it could be a twin to Earth creates the usual issues for Kitty & Company. It also raises questions of Z'porrah and Ancient influence--not to mention cloning, the multiverse, and, scariest of all, whether or not the Black Hole Universe Police are starting to take too much of an interest in this particular universe.

Review:
With more and more alien refugees arriving in our solar system Kitty and her crew have quite a lot of work on their hands keeping the peace and finding everyone suitable homes. That would be more than enough to keep them busy on its own but when they receive a distress call from the other side of the galaxy they suddenly find themselves on an intergalactic mission that could either save the universe, or end it.

There aren't many series that are still going this strong by the time they reach book 16 but Gini Koch never fails me and this book has all her trademark humour, fantastic characters and fast paced action. Not only do we get to spend time with many of our favourite characters (lets face it there are now too many for all of them to have a starring role in every book!) but we get to meet a whole host of new ones who I'm sure we'll be seeing more of in the future. I absolutely love seeing Kitty and Jeff back in the thick of the action again, things slowed down a little for a few books when they were the ambassadors but now they seem to have more freedom to go on adventures again and that's when they're really at their best - when they're coming up with crazy schemes to save the day.

I'm not going to say too much more because fans of this series will already know exactly what to expect from this book. Instead I'll just confirm that you're in for one hell of a treat and let you get on with enjoying the ride!