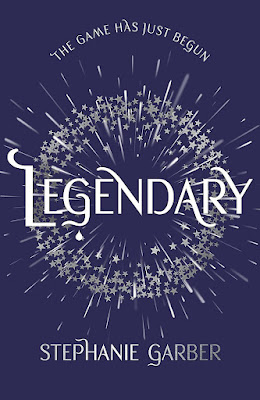 A heart to protect. A debt to repay. A game to win.

After being swept up in the magical world of Caraval, Donatella Dragna has finally escaped her father and saved her sister Scarlett from a disastrous arranged marriage. The girls should be celebrating, but Tella isn’t yet free. She made a desperate bargain with a mysterious criminal, and what Tella owes him no one has ever been able to deliver: Caraval Master Legend’s true name.

The only chance of uncovering Legend’s identity is to win Caraval, so Tella throws herself into the legendary competition once more—and into the path of the murderous heir to the throne, a doomed love story, and a web of secrets…including her sister's. Caraval has always demanded bravery, cunning, and sacrifice. But now the game is asking for more. If Tella can’t fulfill her bargain and deliver Legend’s name, she’ll lose everything she cares about—maybe even her life. But if she wins, Legend and Caraval will be destroyed forever.

Welcome, welcome to Caraval...the games have only just begun.

Review:
I absolutely loved Caraval, it even made my top YA of the year list, so of course I was ridiculously excited to return to this world. It pains me to say this but unfortunately Legendary just didn't live up to my expectations. Yes we have another game at play but this had none of the magic and sparkle of the first story, instead of being a fast paced story full of unexpected twists this is predictable and actually pretty boring.

There's no denying that Stephanie Garber can write and I did enjoy some elements of this book, particularly the extra world building and the way the fates are woven into the story, but there was definitely something missing. This story is told from Tella's point of view and I just don't find her as easy to relate to as Scarlet, I like that she's more independent and that she's willing to take risks but she's so impulsive that she never thinks things through and it leads her to make stupid mistakes. It was so frustrating to see her keeping so many secrets from Scarlet yet again, you'd think she would have learned better than that after the last time. I also thought the romance between her and Dante was on the flat side.

Jacks could have been an interesting character but he's fairly one dimensional, I didn't have any sense of conflicting emotions in him, pretty much what you saw was what you got where at least with Dante you were kept guessing about his motives. I think my favourite parts were the revelations about Tella and Scarlet's mother, I'm really curious to see how that will play out in the next book and I still really want to see Scarlet get her happily ever after. I'm not as invested in Tella's story but it will be interesting to see how she deals with revelations made at the end of Legendary.

As much as this didn't quite manage to live up to my expectations I do still want to read Finale, I really hope that Stephanie Garber can capture the magic of Caraval and give both of the girls a fitting end to their stories.