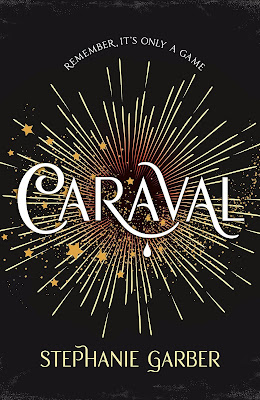 Welcome to Caraval, where nothing is quite what it seems.

Scarlett has never left the tiny isle of Trisda, pining from afar for the wonder of Caraval, a once-a-year week-long performance where the audience participates in the show.

Caraval is Magic. Mystery. Adventure. And for Scarlett and her beloved sister Tella it represents freedom and an escape from their ruthless, abusive father.

When the sisters' long-awaited invitations to Caraval finally arrive, it seems their dreams have come true. But no sooner have they arrived than Tella vanishes, kidnapped by the show's mastermind organiser, Legend.

Scarlett has been told that everything that happens during Caraval is only an elaborate performance. But nonetheless she quickly becomes enmeshed in a dangerous game of love, magic and heartbreak. And real or not, she must find Tella before the game is over, and her sister disappears forever.

A mesmerising, magical and stunningly imaginative debut novel for anyone who loved The Night Circus.

The hardback will have FOUR secret hidden-on-the-board covers featuring stunning foiled illustrations. The one you receive will be random, but all are jaw-droppingly beautiful.

Review:
It's always makes me nervous when books receive the amount of hype that Caraval did, my expectations are raised sky high and that can be hard for any book to live up to so it often ends in disappointment, especially when you compare a book to two of my favourites - The Daughter of Smoke and Bone and The Night Circus! Thankfully in this case Stephanie Garber's debut more than lives up to it's reputation though and I was captivated from the very first page.

Scarlet and Tella's father has gone from overprotective to downright abusive since their mother's disappearance and the girls are desperate to escape his clutches. For years Scarlet has been trying to get them tickets to Caraval, an exclusive performance of magic and mystery held once a year and offering one lucky winner the chance at a price of a lifetime. She had hoped to use that prize to win their freedom but after getting no response to her letters from Caraval's Master Legend Scarlet has found another way to escape - an arranged marriage to a stranger. Then just days before her wedding the sisters receive the tickets they've always wished for but will Scarlet be brave enough to risk her future happiness for a game that she has very little chance of winning.

I honestly don't know if I can do this book justice, especially when I want to go into as little detail as possible about what happens after the girls arrive at Caraval. This is the kind of story that it's best to go into without knowing what to expect, you'll have a lot more fun with it if you just let things unfold as you're reading. Scarlet is repeatedly told that Caraval is only a game and that nothing is quite what it seems but it's very hard not to get sucked into the events that play out around her, especially when Tella is missing and it's up to Scarlet to find her. Stephanie Garber throws twist after twist at her readers and I loved experiencing everything through Scarlet's eyes and seeing how much she grew over the course of the book.

Scarlet and her sister are complete opposites but they both try to protect each other in the best way they know how. Scarlet is the shy sister, the one who overthinks things and tries to plan ahead for every possible outcome, she's less of a risk taker but she's very, very protective of Tella. On the other hand Tella is much more impulsive, she lives for the moment and doesn't worry about the future when there is fun to be had in the present. She wants to escape their father just as much as Scarlet does but she wants to have her freedom rather than finding another safety net. They have very different ways of looking at life but it's obvious that they care about each other deeply and that sisterly love shines through in a lot of different ways. I found Scarlet much easier to relate to and very easy to root for while Tella could come across as a little selfish and rash. One of my favourite characters was Julian though, he's very much a mystery for most of the book and he's keeping some pretty major secrets but I loved the way he brought out Scarlet's more adventurous side and how he was always there to help her. The romance that develops between them was sweet and even though it happened over a fairly short time period it never felt rushed.

Caraval contains a bit of everything from action and romance through to magic and mystery. The island is like a huge playground for adults where every dream can come true but so can every nightmare, anything you could wish for is there for the taking but you have to be very careful you don't end up bargaining away something you can't live without. I was completely captivated by Stephanie Garber's beautiful writing, the story is very cinematic and it's easy to picture events unfolding in front of you so it's no surprise that movie rights have already been optioned. I would absolutely love to see this on the big screen so I'm really hoping that the movie will go ahead. This was a fabulous debut and I'm already looking forward to reading the sequel, Stephanie Garber is definitely an author to watch out for.