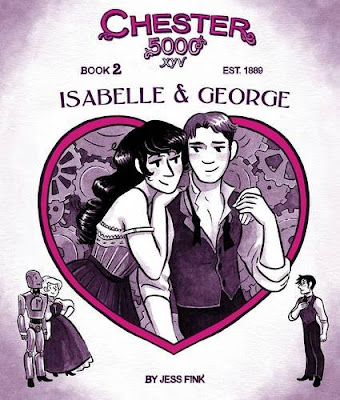 1889: an age of industrial revolution and sexual frustration. Isabelle is a lonely orphan, reprimanded at every turn by her strict matron. George is an inventor on the cusp of a brilliant discovery. Together they find love, but in an age of violent mechanization and military secrets, can their passion survive?

Review:
If you enjoyed the first book in this series then you're bound to love this one just as much if not more. Once again you can read it completely for free on Jess Fink's website but there is also a print edition releasing on the 14th of February. This story actually starts before the first book begins but I would definitely recommend reading them in order because it spans a much larger length of time and continues beyond the end of Chester 5000-XYV.

We already met Isabelle in the first book but this story allows us to get to know her and her husband George much better from how they met and married through to when Isabelle was introduced in the first book. I have to say I like George a LOT more than I liked Robert but we actually get the chance to see more of Robert here too and he wasn't as bad as I initially thought he was. We get to see just why he became so work obsessed and started neglecting Priscilla and that made him an easier character to like.

As with the first book Chester 5000-YXV: Isabelle and George is written completely without dialogue so it's impressive how well you are able to connect with all of the characters and understand what motivates them without them ever speaking. The artwork was just as impressive and I think this had more of an actual story than the first book. That's not to say there isn't sex in here (in fact I think it's a little more risqué this time around!) but there were other things going on too which is probably what held my interest enough to read both books in one sitting. I hope that this isn't the last we've seen of these characters, the web comic hasn't been updated in a year but the book is only just being released in print so perhaps there is still more to come.