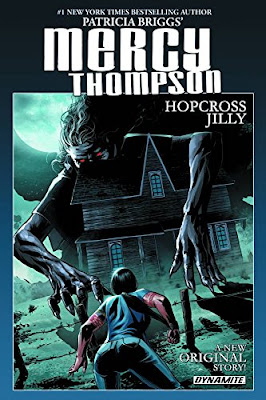 Mercy is a shapeshifting coyote and honorary member of the Tri-Cities werewolf pack. When the pack stumbles upon the buried bones of numerous dead children, she shapeshifts into a mystery of the legendary fae - a mystery that draws Mercy's stepdaughter Jesse into the fray!

Review:
Hopcross Jilly is the second Mercy Thompson graphic novel I've read and I have to say I think I liked it more than the first one. The characters still aren't exactly how I pictured them but I don't think any artist would be able to get this perfectly right for every fan out there so that's not a real issue. The main thing is that the characters are easily recognisable and the artwork is much more consistent here than it was in Homecoming. If you're wondering where this story fits into the series time line it's between Frost Burned and Night Broken (and just after events in Dead Heat if you're reading the world order including the Alpha & Omega books - which I'd HIGHLY recommend you do!) so it may contain spoilers if you're not at least that far into the series.

Just in case you'd like to get an idea of what the main characters look like in Hopcross Jilly here are Mercy, Adam and Jesse.

This is a story about missing children and it gives us a chance to spend some time with Adam's daughter Jesse which I really enjoyed. I really hate that she is treated so badly at school just because her dad is a werewolf but considering how ruthless teenagers (and humans in general if we're honest!) can be towards anyone different I didn't find that at all surprising. When Adam's pack finds a bunch of very old skeletons and then children start to go missing they immediately become suspects in the eyes of the public and Jesse becomes a convenient target for the missing teenager's friends. Fear and ignorance is never a good combination and we see that in spades here.

Things have definitely got interesting in the series since the fae decided to stop hiding how dangerous they are, especially since they seem to be deliberately letting the worst of their kind out of the reservations with the sole purpose of reminding humanity that they are a force to be reckoned with. I hope that means we're going to see lots more interesting fae creatures from here onwards.

I think the graphic novel format worked really well to tell this story, it doesn't give the same depth of characterisation as a normal book but now we're at a point where we know the main players so well it was fun to see them in a more visual manner. I absolutely love this series though and will happily devour as many stories as Patricia Briggs can write no matter what format they come in!