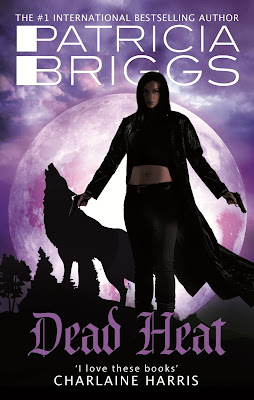 The Alpha and Omega novels transport readers into the realm of the werewolf, where Charles Cornick and Anna Latham embody opposite sides of the shifter personality. Now, a pleasure trip drops the couple into the middle of some bad supernatural business . . .

For once, mated werewolves Charles and Anna are not traveling because of Charles's role as his father's enforcer. This time, their trip to Arizona is purely personal - or at least it starts out that way . . .

Charles and Anna soon discover that a dangerous Fae being is on the loose, replacing human children with simulacrums. The Fae's cold war with humanity is about to heat up - and Charles and Anna are in the cross fire.

Review:
I absolutely love Anna and Charles, they're one of my favourite couples and I can't get enough of them. What I enjoy most about them is the way that even though Charles is protective of Anna he also understands her need to stand on her own two feet, he wants her to be an equal partner and he encourages her to be independent while still promising to have her back whenever she needs him. Charles has always kept his distance from everyone else though and even Anna knows very little about his past. It's not been easy for him to work as his father's executioner and it's hard to make friends with other wolves when you know that one day you could be called on to kill them if they ever cross the line.

So the people that Charles considers part of his inner circle are very few and Dead Heat gives us the chance to meet one of his oldest, dearest friends. A friend who is human and who Charles has avoided visiting for a long time because it hurts him to see how old Joseph has become. Charles knows that the time is coming when he'll have to say goodbye and even thinking about that is painful for him. The story is quite bittersweet in some ways but it's also about appreciating the people you love while you still can and I really enjoyed getting to see a more funny, slightly lighter hearted version of Charles. It was also great to learn a bit more about his past and see how much he has changed over the years.

Dead Heat is slower paced than the previous books but I felt that worked really well here, there is a lot of character development and a lot of time just seeing Anna and Charles enjoying each other's company and spending time with friends like a normal couple. Of course, it wouldn't be a Patricia Briggs book if they didn't find some kind of mystery to investigate and I enjoyed the reappearance of FBI Agent Leslie who I think makes a nice addition to the series cast. The mystery was well drawn out and definitely raised the stakes since they were up against a predator who was focusing on children. The one thing I didn't enjoy so much was Anna's desperation to talk Charles into them having kids of their own, it's not a trope I particularly enjoy reading at the best of times but it seems particularly strange when you're talking about a couple who are probably going to have hundreds of years to spend together. Why do they need to start a family so soon? Surely they'd want to enjoy time as a couple first? Having said that I do think the author did a good job of explaining Anna's feelings so it's really personal preference that I wanted them to wait. I'll see how it plays out over the next few books though because I'm sure if anyone can sell it to me Patricia Briggs can!

I don't think this was my favourite novel in the Alpha & Omega series but it's still a solid instalment and I love Anna and Charles as much as ever. I just have a fangirl worship thing going on for this entire world though, I love the cross over of characters between this and the Mercy Thompson books and I always know that picking up a book in this world I'm going to get completely lost in the story and not surface for air until I reach the last page.