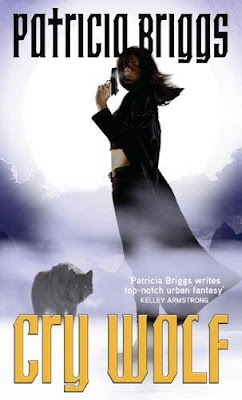 Anna Latham hasn't had an easy life. Turned into a werewolf against her will and forced into a life of servitude, she'd do anything to break free from her pack. So when Charles takes on her pack's Alpha, Anna finally has a chance to escape.

But now Anna's rescuer is the one who needs help. Hikers are dying and all signs point to a werewolf that's gone rogue. An injured Charles can't handle the investigation alone and soon Anna is in way over her head. Few things are more dangerous than a rogue wolf, and Anna is about to find out just what they are . . .

Review:
Although Cry Wolf is the first full length novel in the Alpha and Omega series I would strongly recommend reading the novella in the On the Prowl anthology before starting this book. You could probably pick things up without reading the novella but you really would be missing out by not seeing how Anna and Charles first met and experiencing first hand the things that Anna goes through at the hands of her previous pack members. This is shaping up to be a fantastic series though so I would highly recommend giving it a try, especially if you are already a fan of the Mercy Thompson books (but you can read these books even if you've not read anything by Patricia Briggs before).

Anna didn't even know werewolves existed until she was turned into one during a brutal attack. Ever since then she has been treated as the lowest member of her pack, used and abused by all of the others with the full consent of her alpha. She hates what she was turned into, she has been given very little information about the rules of her new life and she has developed a deep distrust of any other werewolves - particularly the dominant males. Charles is the son of Bran, the leader of the North American werewolves, and works for his father as the pack enforcer. He met Anna when he was asked to investigate her pack and his wolf instantly recognised her as his mate. He was horrified by what he witnessed of Anna's abuse and rescued her from the Chicago pack and took her home with him. Now Charles has been asked to investigate werewolf attacks close to his home but as he is still recovering from the injuries sustained during Anna's rescue he is going to need Anna's help to take down the rogue werewolf.

Anna was always told that she was the most submissive member of her pack, she was treated as the lowest of the low and her self confidence is through the floor. But Anna isn't a natural submissive at all and Charles immediately recognised her as a very rare omega wolf, someone with the ability to calm the wolves around her and someone who would be an important member of any pack. He is determined to help her build her confidence and show her just how special she is. He is equally determined to show her that she has nothing to fear from him and that if she'll let him he will always be there as her mate to protect her. Having seen how badly Anna has been treated it is impossible not to feel sorry for the way she was brought into her new life but she isn't a character who is looking for sympathy. As much as she is wary of trusting people she is also a very strong woman - she had to be to have survived for as long as she did. She is understandably nervous around strangers but she instinctively knows that she can trust Charles not to hurt her. As she gets to know him better she becomes much braver at standing up to him when she knows he putting himself at risk and I was really pleased to see that she has an important role to play in the investigation of the werewolf attacks. Anna is never going to be the kind of woman who sits at home waiting for her man while he is out facing something dangerous which makes her perfect for Charles.

Charles is a great hero and someone who is incredibly protective of his friends and family but it doesn't take him long to realise that Anna is going to be the most important person in his life from now onwards. He never once pushes her though and is so patient and caring with her that it is a joy to watch. Charles is an old and incredibly powerful werewolf but he also has magic that was passed down to him from his Native American mother and I'll be really interested to learn more about his abilities. He isn't very good at expressing his emotions and as someone who has always been a bit of a loner words aren't his strong point which leads to some misunderstandings between him and Anna but I was glad they were able to resolve things in this first book so we aren't going to have a whole series of will they / won't they.

Anna and Charles are such a fab couple but the romance isn't actually the main focus of the story and there is plenty of action and intrigue to keep urban fantasy fans happy. The story kept me turning the pages and if I hadn't been in the middle of moving house I would have happily devoured this book in one sitting. Patricia Briggs is one of my favourite urban fantasy authors and I would highly recommend not only this book but also her entire Mercy Thompson series. I'm looking forward to spending more time with Anna and Charles when I pick up Hunting Ground.