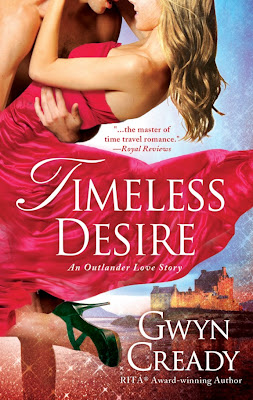 Two years after losing her husband, overworked librarian Panna Kennedy battles to distract herself from crushing Grief, even as she battles to deal with yet another library budget cut. During a routine search within the library’s lower levels, Panna opens an obscure, pad-locked door and finds herself transported to the magnificent, book-filled quarters of a handsome, eighteenth-century Englishman.

She soon recognizes the man as Colonel John Bridgewater, the historic English war hero whose larger-than-life statue loomed over her desk.However, the life of the dashing Bridgewater is not at all what she imagined. He’s under house arrest for betraying England, and now looks upon her a beautiful and unexpected half-dressed visitor as a possible spy.

Despite bad first impressions (on both sides), Bridgewater nonetheless warms to Panna, and pulls her into his escape while both their hearts pull the other headlong into their soul-stirring secrets.Very quickly Panna is thrown into a whirlwind of high-stakes intrigue that sweeps her from Hadrian’s Wall to a forbidding stone castle in Scotland. And somewhere in the outland, Panna must decide if her loyalties lie with her dead husband, or with the man whose life now depends on her.

Review:
Panna is a widow who lost her husband two years ago and hasn't been able to move on with her life. She is a librarian who works in the Carnegie library and to deal with the latest budget crisis she starts searching hidden areas of the library looking for artifacts she might be able to sell. Instead of hidden treasure what she actually finds is a doorway into the past. She soon finds herself back in the eighteenth century in a castle on the English / Scottish boarder and walking straight into the arms of Colonel John Bridgewater, the man whose statue she has spent hours admiring. What she doesn't immediately realise is that it is John's illegitimate brother James that she has met. James is also a member of the English army but he has very different plans to those of his brother and is working secretly with rebels to try to prevent a war between England and Scotland.

I'm going to start this review with a confession - Timeless Desire is the first book I've read in this kind time travel / historical romance genre. I do love a good historical romance though and I was intrigued by the idea of adding time travel into the mix but I have to say I was disappointed. I felt that both main characters accepted the idea of time travel far too quickly and neither of them really questioned how it was possible. I guess I'd expected there to be some kind of explanation for how time travel worked but that wasn't the case. Now, I'm not sure if that is how it always is in this kind of story and if it is then I guess that this genre isn't going to be one for me. I do seem to be in the minority when it comes to this book so please don't let me put you off giving it a try but I always give my honest opinion in my reviews.

I decided to put my issues with the time travel aspect of the story to one side and just enjoy the story for it's romance but I'm afraid that I didn't really enjoy that part of the book very much either. I found that Panna and Bridgewater seemed to fall in love far too quickly and I was still struggling to understand what they saw in each other. I just didn't feel any kind of emotional connection between them. I also found the language used in the love making scenes was off putting. Descriptions like "Jamie was long and thick, a pale pink spear towering over compact testes and a thick carpet of golden-brown fur" just don't do it for me! It was more of a turn off than anything else, as was Jamie saying things like "I want you like a whore" to Panna. I'm all for dirty talk but you can take things too far.

All in all I'm afraid I found this a difficult book to get through and I don't think I'll be rushing out to buy more of this author's work. I am still curious about the genre though and will probably try it again at some point in the hope that I find something that I enjoy more.

Source: Received from Blue Dot Literary in exchange for an honest review