Review: The Masque of the Red Death - Bethany Griffin 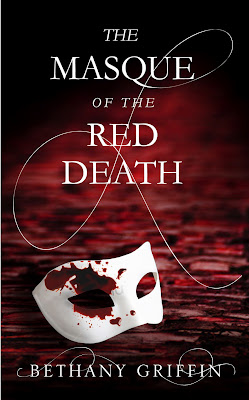 Everything is in ruins.

A devastating plague has decimated the population. And those who survived live in fear of catching it as the city crumbles to pieces around them.

So what does Araby Worth have to live for?

Nights in the Debauchery Club, beautiful dresses, glittery make-up . . . and so many tantalizing ways to escape from it all.

But in the depths of the Debauchery Club - in the depths of her own despair - Araby is going to find more than oblivion. He's called Will, the handsome, secretive proprietor of the club. And Elliott, the wickedly smart aristocrat. Neither is quite what he seems. Both have secrets. Everyone does.

And Araby may find something not just to live for, but to fight for - no matter what it costs her.

Review:
The Masque of the Red Death is based on a story of the same name by Edgar Allen Poe but as I haven't read the original version I won't be comparing the two in my review. The story is set in a world where a modern day plague called the weeping sickness has wiped out the majority of the population. Those who remain live in fear of capturing the disease and anyone who can afford to constantly wears a mask to prevent them from catching it. The city Araby lives in is falling down around her, they don't have enough people left to inhabit the high rise buildings and many areas have fallen into disrepair. This is a dark world, one where it isn't easy to survive - especially if you don't come from a wealthy family or don't have the favour of the prince.

Araby's father invented the masks that protect the rich from the weeping sickness and that makes her entire family important to each of the people who want to take control of the city. The current leader is Prince Prospero, he may have failed to protect his citizens from illness but he is determined to keep control of the city even though he has two major rivals. The first is a religious zealot who is spreading rumours and causing discontent amongst the poorest members of society. The second is a young man called Elliott who has very personal reasons for going against the prince and who has been biding his time for years while preparing to make his move. The mask she wears may protect Araby from sickness but it can't protect her from the despair she has felt ever since a tragic event in her past changed her life forever. Unable to let go of her guilt she now spends her time searching for any form of release in the Debauchery Club she visits with her friend April. When April goes missing Araby finds herself caught in a web of lies and power struggles and it is only when she releases how easy it would be for her life to end that she finally understands how much she wants to live.

Bethany Griffin has created a dark and creepy world full of sickness and death. Reading the story made me think of how life must have been during the black death - the way the corpse collectors gather piles of dead bodies on their carts, the marks painted on the doors of infected houses and even the way people wore masks to protect themselves from the disease (although these masks are much more effective than a pouch filled with flowers!). It must have been an incredible frightening time to live through and I can't imagine how horrific it would be to watch as your friends, family and neighbours became infected and died. The author does a fantastic job of capturing that despair and drawing you into the world she has created. That isn't to say the story is all doom and gloom though, it was lightened with humour and you do get to see a kinder side to human nature along with the bad.

I wasn't sure what to make of Araby at first, she comes across as very spoiled and selfish at the beginning of the book. She seems to have had everything handed to her and yet she spends her time getting wasted on drugs and alcohol - not really my ideal heroine for a story. However, once you get to know her and learn about her past you start to understand why she became that way. Her life isn't as easy as it first appears and it is her grief that has caused her to become so detached from everything around her. Araby comes a long way by the end of the book though, as she is drawn into Elliott's world she starts to grow up but it is the friendship that she finds with Will that I felt had the biggest impact on her. For the first time she starts to let other people close to her and as she begins to care for them she opens up in a whole new way.

I'm getting a little bored with love triangles now, it seems to be something that we come across in practically every YA book I've read recently so I was hoping to find a story without one for a change. However, in this case I felt the triangle really worked. It was easy to see why Araby is drawn to Elliott - he is outgoing and passionate about his cause, he wants to protect his sister but most of all he wants to stop the prince and he will do whatever it takes to make sure he achieves his goal. I didn't think he was at all trustworthy - in fact he repeatedly tells Araby not to trust him because he will hurt her if it helps his cause - but there is still something about him that draws you to him and some of his actions towards the end lead me to think he has more depth than I expected. I have to admit that I'm a much bigger fan of Will's though. Will is the person who is in charge of the Debauchery Club but he doesn't partake in the wares that he makes available to others. He is doing his best to survive in difficult circumstances and his main concern is protecting his family. Like Elliott he will do whatever he has to to keep his younger siblings safe but I had more respect for him than I did for Elliott. Will is so sweet with his family and I liked Araby more when she was with them than when she was with Elliott and April.

I'm glad to say that the romance isn't the main part of the story though and it didn't take away from the plot line. I loved the writing in The Masque of the Red Death, the descriptions were superb and I was able to clearly picture everything that happened. The story builds to a breathtaking climax that left me desperate to get my hands on the next instalment to the series. I have so many questions that I need answers to and I can't wait to see what happens next for Araby, Will, Elliott and April. If you like your dystopian fiction dark and with a steampunk twist then you're going to love The Masque of the Red Death. This is a great start to a new series and has left me eager to read more by Bethany Griffin.