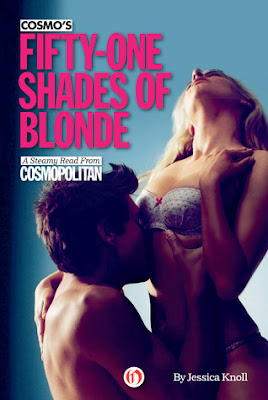 Christopher Reiss is the handsome and extremely intimidating CEO of a major financial firm. Megan’s nothing but a lowly assistant. But when she stumbles upon some incriminating evidence that could threaten Christopher’s career, she finds herself on his radar . . . and eventually his desk, his kitchen counter, his bed . . . you get where this is going, right?

Visit the books page on Goodreads for more information

Review:
Cosmo's Fifty-One Shades of Blonde is a very short story coming in at around 30 pages and spilt into five chapters, I believe part of the story was originally published in the magazine and has now been released as an ebook with additional added material. Obviously the title of the story gives away the fact that this is going to have similarities to the incredibly popular Fifty Shades of Grey trilogy and I couldn't resist giving it a try. I was hoping for a short but hot read with a sexy alpha male and to some extent that is what I got but unfortunately I found myself feeling disappointed. The story is short and hot but I didn't find myself attracted to Christopher and I couldn't understand what he and Megan saw in each other.

I love a good smut scene and I have to admit that the sex in this story was quite well written but I like a bit of a plot to go along with my erotica. In this case the characters were completely one dimensional, they hardly say more than two words to each other before they're at it like rabbits, in fact from the little they do say it's quite obvious they neither trust or particularly like each other. The plot (if you can even call it that) of the young office assistant with dreams of being a journalist just happening upon her super rich boss as he has a secret meeting with a high profile mob member (in a public restaurant of all places - because that's where all famous people arrange their top secret meetings that could end their career if they are discovered!) was just beyond ridiculous.

Cosmo's Fifty-One Shades of Blonde is obviously taking the mickey out of the series it is using to attract it's readers and unfortunately I'd have to say my advice would be to spend your money elsewhere. If you are looking for a quick read that has roughly 25 pages of sex in a 30 page story then this will probably hit the spot but if you want likeable characters and a story to go along with the smut then there are plenty of better options out there.