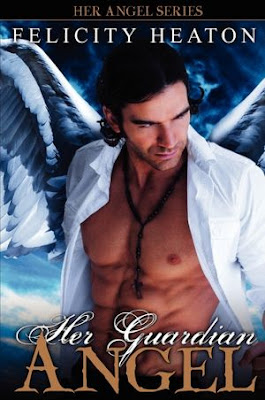 A love so strong it will shake Heaven and Hell

A guardian angel dedicated to his duty, Marcus will do whatever Heaven asks of him, but even his loyalty has its limits. When his superior orders him to gain Amelia’s trust through seduction, Marcus starts to question his mission and his feelings for the beautiful woman he has watched over since her birth.

Amelia has gone from one bad relationship to another, so when a gorgeous guy moves in next door looking like Mr Right, she hopes he doesn’t turn out to be another black knight in disguise. But there’s more to Marcus than meets the eye, and when he rescues her from three demonic men, Amelia is thrust into his nightmarish world. On the run from demonic angels and the Devil himself, aided by warrior angels and their amazing women, Marcus and Amelia discover a love that will last forever.

When the strength of that love is put to the test, will Marcus and Amelia win their fight for survival against the odds or will they lose in a deadly eternal game between Heaven and Hell?

Review:
Her Guardian Angel is the fourth book in Felicity Heaton's Her Angel series but can be read as a stand alone story. I'd highly recommend this series to any paranormal romance lover though - especially angel fans. Felicity always manages to create such fantastic characters and it is impossible not to fall for them!

Marcus has been a guardian angel ever since a curse stopped him using his wings. All he has ever wanted is to prove his loyalty and now that the curse is starting to lose power he desperately wants to be given the chance at becoming a warrior angel to help protecting heaven from evil. He has been guarding Amelia from a distance ever since she was born but now that her destiny is coming closer he has been sent to earth to keep her safe from harm. Amelia has had terrible luck when it comes to men, no matter how hard she tries she always finds herself picking the guys who are going to treat her badly. When Marcus moves in next door to her she hopes that she might finally have found a good guy but Marcus's hot and cold attitude towards her leave her feeling confused.

Marcus has never questioned the orders he is given but when he is told to seduce Amelia to get closer to her he is left feeling torn. As much as he is attracted to her he doesn't want to be responsible for breaking her heart when he has to return to heaven. When they come under attack from hell's angels Marcus has no other choice but to reveal his identity to Amelia and she suddenly discovers there is more to life than she ever realised. As Marcus's feelings for Amelia grow he is forced to decide between the one thing he has always dreamed of and the woman he never knew he wanted. But if he can't keep her safe from both heaven and hell then the decision will be taken out of his hands.

Amelia has always been a strong and confident woman in spite of her disastrous relationship history but her latest ex has really knocked her confidence. The way he has become so abusive since they split has worn her down and she is starting to doubt her abilities. When Marcus steps in to protect her she is drawn to him but she is also wary of getting her heart broken yet again. Then when Marcus's identity is revealed she becomes even more confused. As heaven and hell battle it out for her soul she starts to realise that the only person she can trust to keep her safe is Marcus and it soon becomes clear that he will even risk his own life to protect her. With Marcus in her life she starts to believe in herself again and soon becomes more confident than ever. In fact after a certain revelation (that I'm not going to say any more about for fear of spoilers!) she really does become a kick ass woman who will stand by her man as an equal and not let him put himself at risk without her.

I think I have a new favourite hero in the her angel series - Marcus is Hot with a capital H! He is a dominant alpha with a protective streak a mile wide but at the same time he is surprisingly innocent. He has never wanted to spend time on earth and has always believed that humans are beneath him so it comes as quite a shock when he finds himself attracted to Amelia. I thought it was really sweet that he was able to talk to our previous heroes from the series to ask them for advice and it was really nice to catch up with them and see how they are getting on with their women. I loved the way things developed between Marcus and Amelia, their relationship felt believable and I was routing for them the whole way through.

I thoroughly enjoyed Her Guardian Angel, alongside the scorching hot romance you also have a fantastic twist in the ongoing battle of good versus evil. A few things happen that I would never have seen coming if I'd been guessing for a million years so I can't wait to see what the knock on effect of that is as the series continues. I can't wait to see how everything plays out in Her Demonic Angel. If you haven't read anything by Felicity Heaton before then this series is a great place to start, the books can be read as stand alone stories but personally I'd suggest reading them in order - they are all so good that you won't want to miss one.