Guest Post: Behind the Scenes of the Royal Street Characters with Suzanne Johnson

Earlier this year I really enjoyed reading Royal Street, the first book in Suzanne Johnson's new Sentinels of New Orleans series so I was very excited when I heard that the series is now being published in the UK by Headline. To celebrate today's UK release I am thrilled to welcome Suzanne Johnson to the blog today to talk about how she went about developing the characters for the series.

Before I welcome Suzanne to the blog I want to give you a bit more information about Royal Street. This is a fantastic start to a new urban fantasy series and one I'd highly recommend reading (you can read my full review here). 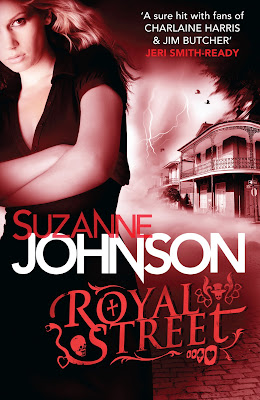 As the junior wizard sentinel for New Orleans, Drusilla Jaco spends more of her time mixing potions and retrieving pixies than she does sniffing out the supernatural bad guys that slip over from the preternatural beyond. It is DJ's boss and mentor, Gerald St. Simon, who is tasked with protecting the city.

But when Hurricane Katrina hammers the city's fragile levees, it unleashes more than flood waters. As the winds howl and Lake Pontchartrain surges, the borders between the modern city and the otherworld start to crumble away . . .

Now the dead and the restless are roaming the Big Easy, and a serial killer with ties to voodoo is murdering soldiers sent to help the city recover. To make it worse, Gerald St. Simon has gone missing, the wizards' Elders have assigned a grenade-toting asshat as DJ's new partner, and an unsavoury, undead pirate called Jean Lafitte wants to make her walk his plank.

If she is going to survive, DJ will have to learn that loyalty requires sacrifice, allies can be found in unlikely places . . . and that duty mixed with love creates one bitter gumbo.

So now you've found out a bit more about the book I'm very excited to hand over to Suzanne Johnson who is going to introduce to you the characters! Please give her a very warm welcome


Behind the Scenes: Developing the Characters of Royal Street
by Suzanne Johnson

Ever wondered how authors come up with characters? First, relax. We rarely base them on people we know. After all, we don’t want to lose friends or provide ammunition to enemies.

Instead, every author I know develops characters based on a kernel: a personality trait or problem. We assign a trait to a hero or heroine, then begin expanding our embryonic character’s backstory. Yes, we usually pull random habits, characteristics, or expressions from people we know—often unconsciously. Most of that backstory, however, never appears in print. It’s hidden on hard drives and private dossiers that never see daylight.

Here are a few random facts from the private dossiers of the main characters in Royal Street.

Drusilla Jaco, or DJ. She’s the heroine of the Sentinels of New Orleans series and a junior-level Green Congress wizard (i.e., a geek).

The “kernel” for DJ: I wanted to start this urban fantasy by exploring some of the issues faced by people in New Orleans following Hurricane Katrina in 2005—and yet form the basis for an entertaining series that could transcend the hurricane setting. So I needed someone who wasn’t quite human but was still relatable, who was young enough to be completely cast adrift by the loss of the things (her mentor, her job) on which she’d anchored her identity and yet who was resilient and driven more by her heart than her head.

Random trivia: In early drafts of Royal Street, DJ was a shapeshifter rather than a wizard, until I read a transcript of a speech by Sir Terry Pratchett called “Why Gandalf Never Married” and realized I wanted to break through the wizard glass ceiling by having a female wizard as my heroine. Once I settled on wizards, the whole worldbuilding for the series fell into place for me.

The “kernel” for Gerry: I wanted to explore the idea of science having driven magic from our world, and imagined it would be a subject that would be a source of annoyance for a wizard. I also wanted a mature wizard whose magical skills complemented DJ’s. Her magic is slow and methodical ritual magic, while Gerry harnesses physical magic.

Random trivia: Gerry is British but was assigned by the Congress of Elders to be the New Orleans sentinel more than thirty years earlier. The house Gerry lives in in Royal Street is the house I lived in when I first moved to New Orleans in 1993. It was located three blocks from the main levee failure that sent eighty percent of New Orleans under the waters of Lake Pontchartrain. Thankfully, I had moved to another part of the city before Katrina.

Alexander Warin. The assassin/enforcer assigned to be DJ’s partner after the hurricane.

The “kernel” for Alex: DJ is a geeky wizard skilled in ritual magic; she doesn’t do guns. So I wanted her new partner to be the anti-DJ. Someone physical rather than cerebral, prone to shoot first and negotiate only when necessary.

Random trivia: Alex is from the town of Picayune, Mississippi, which lies about forty miles north of New Orleans. He played high school football for the Picayune Maroon Tide and is the youngest of four sons.

The “kernel” for Jake: I wanted someone not related to DJ’s business to whom she could be attracted because he was human. She’s surrounded by so much chaos, and Jake’s humanity is something that both attracts her and makes her question her own identity.

Random trivia: Jake is a U.S. Marine Corps veteran who came home from Afghanistan scarred both inside and out. At the time Royal Street begins, Jake has battled his way back from alcohol abuse. More of his inner demons will be exposed as the series progresses.

The “kernel” for Jean: New Orleans has had so many colorful characters in its history that I created a class of preternaturals called the Historical Undead, famous humans given immortality in the Beyond by the power of human memory. As long as people remember them, they live. And no one is more famous in New Orleans than Jean Lafitte.

Random trivia: Jean Lafitte was originally meant to appear only in the first scene of Royal Street, but he wouldn’t leave. He’s now a major series character. My version of Lafitte is very much based on historical research, from his size (six-two, which was HUGE in 1815) to his wicked sense of humor to his intelligence.

There are other characters in the series, of course, including more of the Historical Undead (jazz great Louis Armstrong, voodoo priestess Marie Laveau, author William Faulkner m) and more preternaturals (loup-garou, shapeshifters, merpeople and maybe even a weregator or two). There might even be one or two from the scariest species of all: humans.

Thank you so much for a wonderful guest post Suzanne, I love finding out more about where authors get the inspiration for their characters! One of the things I really enjoyed about Royal Street was the addition of the Historical Undead - it is so much fun to see people from the past brought back to life. I'm very excited to see that Jean Lafitte is going to keep cropping up as the series continues, I was drawn to him from the very first page!


So what do you all think of Royal Street? Which character intrigues you the most? Have you already read the story? Leave me a link to your review if you have. Finally which cover do you prefer the UK one or the US one? I really like the way DJ is using her magic in the US cover - it feels like a real action shot! I think I prefer the UK cover though, I love the colouring and I like the way you can see the storm in the background. I prefer the writing on the UK cover too, the font used for the title is fab!
at 19:30