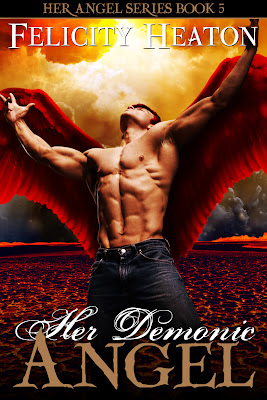 A demonic angel with a heart of ice, Veiron walks a dark path with vengeance on his mind. Nothing will sway him from his mission to destroy his master... until he risks his life to enter Hell once more to save a mortal female. The fiery beauty makes him burn with hungers he must battle and needs he cannot deny, tempting him to surrender body and soul to her.

Erin is convinced her refusal to do the Devil’s bidding will see her die in a terrifying realm straight out of her nightmares. The last thing she expects is the lethally sensual warrior who breaks into her cell and awakens the darkest desires of her heart and a fierce longing to know the heat of his caress.

Pulled into an incredible world where war is set to ignite and darkness is on the rise, Erin races with Veiron to escape the Devil’s legions in a journey fraught with danger and filled with passion that flares white-hot.

When Erin is faced with a life-shattering realisation and an extraordinary destiny, will their love give them the strength to battle both Heaven and Hell or will they be parted forever?

Review:
I am a huge fan of Felicity Heaton's Her Angel series so I couldn't wait to get my hands on Her Demonic Angel. This is the longest book in the series so far and it is also my new favourite. Although each of the books in this series works as a stand alone story I would recommend reading at least the fourth book Her Guardian Angel before picking up this instalment. That last book was a game changer for the series and events that occurred had a big impact that has continued into this one. As such this review may contain slight spoilers for the last book but it will remain spoiler free for Her Demonic Angel.

Anyone who has read Her Guardian Angel has already met the hero of this story - Veiron was the demonic angel who has been locked in an eternal battle with Marcus for Amelia and he was the one that helped them change their fate. Now all Veiron wants to focus on is getting revenge on both the devil and heaven for the way they have controlled them all for centuries. He doesn't intend to let anything get between him and his goal but when Amelia asks for his help rescuing her sister he doesn't have much choice but to agree.

Erin has been captured by the devil and taken to hell to be used as bait for her sister. She had no idea that hell was real or that angels existed but the last few weeks of captivity have proved otherwise. She may be being held against her will but she is still determined to get answers about why the devil wants her and she isn't going to let him force her into making a deal. When a sexy man arrives at the door to her cell and tells Erin that Amelia sent him to rescue her she is wary and thinks it is some kind of trick but faced between remaining in her cell and taking a chance at freedom she goes with him.

The attraction between Veiron and Erin is instant but the regular misunderstandings between them don't make it easy for them to become a couple. I loved the way they slowly get to know each other and when they start to fall they both fall hard. It may take a while to get to the sexy times but it is definitely worth the wait and Veiron is the hottest of the angels yet which probably shouldn't be surprising since he is demonic! Veiron has a tough outer shell that he shows the world, he comes across as grumpy and arrogant but deep down he has a heart of gold. He has never had anyone who loves him for who he is and isn't put off by his demonic side so it takes him a while to believe that Erin really does care for him. He is wary of letting her into his heart but once he puts his fear to one side she quickly becomes everything to him. Erin is a great heroine, she is strong and smart but she cares deeply about her family and friends. She isn't afraid of fighting for what she believes in and she will risk her life to protect those that she loves.

Along with a wonderful love story Her Demonic Angel is also full of action and some shocking twists. I couldn't turn the pages fast enough but I also didn't want the story to end! This was a fantastic instalment to one of my favourite series and one that I can't recommend highly enough. Paranormal romance fans who haven't discovered Felicity Heaton yet are really missing out.