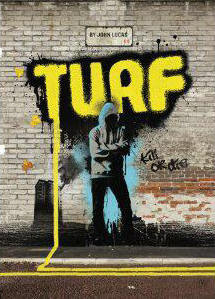 Jay is fifteen years old and a member of the Blake Street Boyz gang. With a knife in his pocket and his best friend Milk by his side, he spends his time fiercely defending their turf. He takes his lessons from the streets and thinks he knows everything about choices.

Choose the right gang, and they will protect you. Choose the right clothes, the right chat, the right snacks and you will be respected. But now he's coming of age and he's being given the chance to step up. He must stab and kill a member of a rival gang... and there are no choices left.

This is a story set against the backdrop of London's inner-city tower blocks, where killing can be easier than choosing a chocolate bar; where gang violence rules, and where loyalty can cost you your soul.

Review:
Turf is a gritty and raw debut from British author John Lucas that offers a no holds barred insight into today's youth gang culture. Set on an estate of run down council tower blocks in London it is easy to imagine teens today who are caught in the same trap as fifteen year old Jaylon.

Jay never really made the choice to join the Blake Street Boyz, it was just something that all the kids on his estate aspired to. Those who aren't in the gang desperately want to be but those who are in soon find that there is no backing out. Every decision you make is monitored by the gang and if you make the slightest mistake then you risk losing your spot in the pecking order. Lines are drawn between the territory owned by the Boyz and the territory belonging to the Yoot (a gang from the neighbouring estate). Everything from where you buy your food, to which benches you can sit on and even the desks you choose at school comes down to which gang you are a member of. Kids who have known each other their entire school lives are enemies just because of the estate they live on.

Now Jay is about to turn 16 it is time for him to face his initiation to move from the Youngers to become a fully fledged member of the Older Boyz. In order to pass the test he must kill a member of the Yoot, a boy from his class at school whose main crime is to live in the wrong area. Jay doesn't want to become a murderer but he doesn't really have much of an option. He lives in a world where it is kill or be killed, even his fellow gang members won't hesitate to take him out if he fails and when they threaten the lives of his family and girlfriend his decision becomes even harder.

You have to give John Lucas credit for not being afraid to tell it like it is, he doesn't hesitate to show the downside of gang life, the way the gang leader motivates the members with fear, the nasty side of fighting both within the gang and outside it along with the drug taking and dealing that goes along with it. This isn't a story for the faint of heart but it does show just how hard it is to escape from the gang life once you've been caught up in it. I have to admit that I wasn't so keen on the heavy religious tone that flows through the story although I can see what the author was trying to achieve with it. There were also parts of the story that were quite surreal, I think it was mainly down to the drugs that narrator Jay was using but it did leave me feeling confused in places.

Overall I have to say that Turf is an impressive debut, one that is hard hitting and that will appeal to fans of books like Keren David's When I Was Joe. It will be very interesting to see what John Lucas comes up with next.

Source: Received from Amazon Vine in exchange for an honest review.