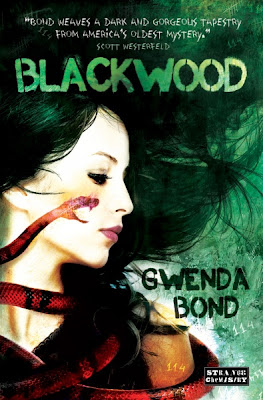 On Roanoke Island, the legend of 114 people who mysteriously vanished from the Lost Colony hundreds of years ago is just a story for the tourists. But when the island faces the sudden disappearance of 114 people right now, and unlikely pair of 17 year-olds may be the only hope of bringing them back.

Miranda, a misfit girl from the island's most infamous family, and Phillips, an exiled teen criminal who hears the voices of the dead, must dodge everyone from federal agents to long-dead alchemists as they work to uncover the secrets of the new Lost Colony. The one thing they can't dodge is each other.

Blackwood is a dark, witty coming of age story that combines America’s oldest mystery with a thoroughly contemporary romance.

Review:
Gwenda Bond's YA debut Blackwood is based on the true story of the Lost Colony of Roanoke Island. Now I have to admit that I knew practically nothing about the legend of Roanoke before starting this book, the little I did know actually came from another popular YA book but since I didn't really enjoy that story I was never inspired to look up more information about the legend. That all changed when I read Blackwood though and I've since spend some time looking into the facts surrounding the Lost Colony. It's hard enough to imagine an entire colony of 114 people vanishing back in the 1500's but fast forward to the present day on Roanoke and imagine that another 114 people vanish overnight. Where have they gone? Has someone taken them? Is it just a big publicity stunt or are the rest of the islanders in danger? Those are just some of the questions that will come to mind when you start reading Blackwood.

I absolutely loved the way Gwenda Bond has taken a real historical incident and recreated it in modern times. We will never know what really happened on Roanoke back in 1587 but our main characters Miranda and Phillips have a chance at uncovering the mystery behind the current disappearances and their investigation had me hooked from the first page. The author has created and engaging story full of historical detail (with a supernatural twist), modern small town life and a great cast of characters and it is a story I'd highly recommend. The story is told from both Miranda and Phillips point of view in alternating chapters but I loved the way occasional small sections are also told by some of the missing people and their families.

Miranda is the town outcast, her family is looked down upon by the other permanent residents of the island and they are considered cursed. Rumours aren't helped by the way her father became the town drunk after her mother's death. Miranda has created a tough outer shell to show the world she doesn't care about the rumours but deep down she is lonely and just longs for acceptance. Phillips is the bad boy son of the island's police chief but what people don't realise is that the reason he caused so much trouble was because he was so desperate to be sent away from Roanoke. When on the island Phillips is brought to his knees by voices that only he can hear yet as soon as he steps foot on the mainland the voices disappear. When his father begs him to return to help investigate the current disappearance he is reluctant but in the end something draws him there almost against his will.

Together Miranda and Phillips work towards solving the mystery and bringing about the return of their missing family and friends but can they get to the bottom of things before any damage is permanent? I really enjoyed the interactions between the two of them and the way their relationship develops from wariness to a gradually built trust which eventually turns into something more. The romance was believable and enjoyable to read but I appreciated the way it never overtook the main story and I absolutely loved the fact we aren't treated to yet another love triangle. I was also really pleased that Gwenda Bond has tied up all of the lose ends in one book, we're not left on tenterhooks waiting for the next instalment to find out what happens next which is quite novel in today's YA market. Don't get me wrong I do love a good series but when you are waiting at least a year between each new release it starts to become impossible to remember what happened in previous books and I find myself less and less interested in picking up the sequels.

Overall I have to say that Blackwood is a great debut and one that has me excited to see what Gwenda Bond will come up with next. If you're looking for a story that brings history to life and then puts a supernatural spin on it, a story that will keep you gripped and make you desperate to uncover the mystery then look no further.

Source: Initially received from publisher via NetGalley but I also received a print copy from Strange Chemistry in exchange for an honest review