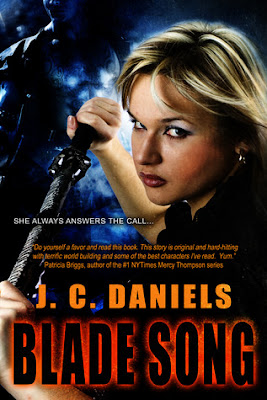 Kit Colbana—half breed, assassin, thief, jack of all trades—has a new job: track down the missing ward of one of the local alpha shapeshifters. It should be a piece of cake.

So why is she so nervous? It probably has something to do with the insanity that happens when you deal with shifters—especially sexy ones who come bearing promises of easy jobs and easier money.

Or maybe it’s all the other missing kids that Kit discovers while working the case, or the way her gut keeps screaming she’s gotten in over her head. Or maybe it’s because if she fails—she’s dead.

If she can stay just one step ahead, she should be okay. Maybe she’ll even live long to collect her fee…

Review:
Kit is half human and half Aneira (think Amazon warrior), she was trained by her family to become an assassin and thief but instead she has opened a PI firm and is struggling to make ends meet on her own. There has been a distinct lack of cases recently so when she is approached by the enforcer for the alpha of the local pack of cat shifters she reluctantly accepts the job. Working for the cats is madness - everyone knows the alpha is insane - but finding out that the job is to locate a missing teenage boy tugs at her heartstrings and she just can't say no. When she finds out that the penalty for failure is her death she realises that she may come to regret that decision, especially since it also means working in close contact with pack enforcer Damon. The job won't be an easy one but if anyone has the skills needed to get it done then it's Kit, she just needs to do it fast enough to keep the alpha happy.

I love urban fantasy so as soon as I heard about Blade Song I wanted to get my hands on a copy, thankfully I was approved for an advanced copy via Netgalley and I couldn't wait to get started. This is a fantastic start to a new series and I think it will appeal to fans of authors like Ilona Andrews and Patricia Briggs. I love the fact that Kit brings something new to the table in a genre that is crowded with vampires and shapeshifters. She is descended from a race of warriors and although she isn't the most physically powerful amongst the supernatural races she has a unique skill set and a special affinity with weapons that mean she isn't someone to be taken lightly. She had a difficult past with her family which has made her wary of trusting others but she is strong enough to stand on her own two feet. If anything she can be a bit too independent and needs to learn to rely on her friends to help her more, I'm sure that is something that we will see her learn to do as the series continues though. There aren't many Aneira left and most of the supernatural community have never even heard of them so Kit is often mistaken for a human and her adversaries have a tendency to underestimate her which comes in quite handy and allows her to take them by surprise.

When it comes to enforcer Damon I have to admit it took me a while to warm to him. I do love Alpha heroes, especially when I'm reading paranormal books, but Damon takes it to the extreme and has a really bad attitude towards Kit at the beginning of the book. One particular action of his was almost unforgivable but you get to see how much he regrets what happened and Kit doesn't let him off easily. As we get to know him we see a much nicer side to his character and it was at that point I really started to see his appeal. There is some great snarky banter between the pair of them and although I felt they moved their relationship forward a bit too quickly I still find that preferable to a series where the protagonists have that will they or won't they thing going on for multiple books. I like a bit of teasing but you can have too much of a good thing!

Alongside Kit and Damon we are introduced to some interesting side characters that I'm looking forward to getting to know better. The witches in particular have a lot of potential as allies for future books and it would be interesting to learn more about the covens. I have a feeling we're going to be finding out a lot more about Kit's family as the series continues and I also think that Damon still has some secrets up his sleeve. I'd recommend Blade Song for any urban fantasy fan, there is plenty of action, the story is fast moving, Kit is a strong heroine with unusual and interesting abilities and Damon is a hero who will grow on you the more time you spend with him. I'm already looking forward to the next instalment.