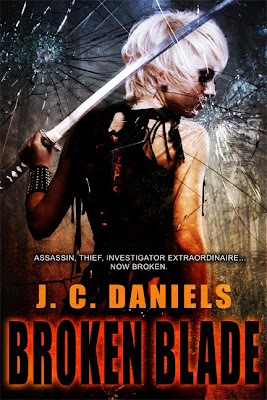 Kit Colbana: assassin, thief, investigator extraordinaire. Now broken. She always expected her past to catch up with her but never like this. Haunted by nightmares and stripped of her identity, she's retreated to Wolf Haven, the no-man's land where she found refuge years before. But while she might want to hide away from the rest of the world, the rest of the world isn't taking the hint.

Dragged kicking and screaming back into life, Kit is thrust head-first into an investigation surrounding the theft of an ancient relic...one that she wants nothing to do with. Her instincts tell her it's a bad idea to just leave the relic lying about, but finding it might be just as bad.

Forced to face her nightmares, she uncovers hidden strength and comes face to face with one of the world's original monsters.

If she survives the job, she won’t be the same...and neither will those closest to her.

Review:
I'm a huge fan of this series and after the shocking ending of Night Blade I was desperate to get my hands on Broken Blade. I'll warn you now that this review will probably contain spoilers for previous books so if you're not up to date with the series then you probably want to look away now. Not before I tell you that this is an absolutely fabulous urban fantasy series though, trust me if you haven't started it yet then you need to get yourself a copy of Blade Song immediately! Fans of kick ass heroines and authors like Ilona Andrews and Patricia Briggs will LOVE the Colbana Files. Now, back to my review (and potential spoilers for Night Blade so now is the time to look away if you haven't read it!).

I'm sure anyone who read the previous book has been just as desperate as I was to find out how Kit is coping with the aftermath of her horrific experiences. She went through hell and even though she survived she is completely and utterly broken. J.C. Daniels doesn't take the easy way out on this one and she shows us just how hard it is for Kit to pull herself back from the depths of despair. Kit has always been a fighter but this time she has just given up, she is pushing away everyone who cares about her and has gone into hiding at Wolf Haven. My heart hurt for her and the beginning of the book really tugs on your emotions as you see what she is going through. Kit has been broken before though and surviving only made her stronger, it takes a lot for her to pick herself back up all over again but our girl has a core of steel and nothing is going to keep her down for too long.

I was so incredibly proud of Kit for the way she starts to put her life back together, it's not all plain sailing and she still has a lot of pain and anger to work through but she's made a good start. I think one of the things I appreciated most was seeing how the events had effected not just Kit but also those around her. Damon feels so guilty for not protecting her and Kit has anger towards him for the same reason even though logically she knows there is nothing he could have done. It was interesting to see how people reacted to Kit and how their attitude towards her had changed, the shifters in particular can't even meet her eyes any more which made me incredibly angry. I have to admit I was surprised at their reasoning though, I thought it was because they thought she was damaged goods but the truth was much more understandable.

Obviously Broken Blade is an incredibly emotional read, it had me close to tears on numerous occasions and really put me through the wringer but I loved it all the more for not taking the easy way out. Even though this story is the most emotional one of the series that doesn't mean there is any less ass kicking and when Kit comes out fighting she does it in style. There are a lot of things she is having to relearn about herself but she will always be a warrior deep down and she proves that to herself and everyone else by the end of the book. She still has a way to go in the recovery process but she has made good progress and it left me feeling hopeful that she'll be back and stronger than ever before too long. I'm already dying to get my hands on the next instalment to the series so I don't know how I'm going to survive another year long wait. This really has become one of my favourite series and I can't recommend it highly enough.