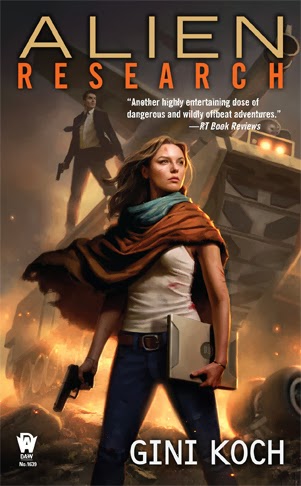 When rumours of a new super-drug surface, the FBI comes to Jeff and Kitty Katt-Martini for help. It soon becomes apparent that the drug is merely the tip of a deadly iceberg and a much more insidious plan is underway involving Titan Security, Gaultier Enterprises, and YatesCorp.

As newly discovered A-Cs and hybrids begin to surface, each with expanded dangerous talents, more and more signs point to a new evil genius who's using both the A-Cs and their enemies as guinea pigs.

Then Area 51 and the Dulce Science Centre go silent while Alpha Team, Airborne, and most of the worldwide A-C Security team are there for training. And if that's not bad enough, Centurion Division is hit with more terrible news: Chernobog the Ultimate isn't a hacker myth, he's a real person - and he's on the bad guy's side.

Now Kitty and company must find the real Dr. Feelgood and stop him or her before the latest version of Surcenthumain hits the streets and more people they love are harmed - or worse.

But when the inconceivable happens, Kitty's focused on only two things: reviving the ACE entity before their enemies realise Earth's best protection isn't actually active . . . and revenge.

Review:
I absolutely love this series so I couldn't wait to read Alien Research and yet again Gini Koch has delivered a fun and action packed story full of my favourite characters. One of the things I loved most about this book was seeing Kitty and Jeff get to take a step away from Washington politics and back into their role as joint heads of operations. When both Area 51 and the Dulce Science Centre are taken offline with pretty much the entire security staff inside Kitty and Jeff don't have much choice but to get back into the thick of things and try to discover what is happening. As much as I love this series I have missed them taking a more active role so it was great to see them getting back to what they do best.

As always Gini Koch has woven this story in an intricate pattern using multiple plot threads and huge cast of characters we're already familiar with along with a few new faces too. She throws in so many twists and the way she ties everything together in the end is nothing short of masterful. You just never know what she is going to throw at Kitty and the gang next and in this book they are definitely in for heartbreak. There are some really shocking and emotional events that I would never have predicted and I was on the edge of my seat dreading what else she could do. There were actually a couple of occasions I was in tears so this is the first time I'm going to warn you to have tissues on hand for this series.

I love all of these characters and considering how many of them there are I'm always surprised by how quickly I can slip back into this world and just know who everyone is. With a lot of series I find I struggle to remember who the main players are or how everyone is connected but I don't tend to have that problem here. I would really like a family tree though to remind me quite how everyone is related, especially now we have so many marriages and children amongst the group. I love that the animals play such important roles in the series too, the poofs and peregrines add so much humour to the story - I just wish they were real and I could adopt some!

If you're a fan of this series you won't want to miss Alien Research, it really is another fabulous instalment. If you haven't discovered these books yet but are looking for a fast paced, action packed series full of humour and sexy aliens then I can't recommend it highly enough - you really do need to read the books in order though so make sure you start with Touched by an Alien.