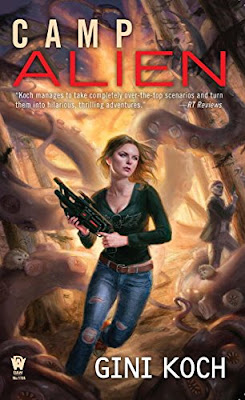 The President and First Lady, aka Jeff and Kitty Katt-Martini, don't get any downtime once the Mastermind has been revealed to the world. Not only do they have myriad high-level government positions to fill, but the scrutiny and pressure on this Administration has gone into overdrive.

The sudden reappearance of a long-forgotten adversary turns out to be the tip of the iceberg. New robots and androids attacking, old enemies making new alliances, and new aliens with interesting abilities almost overshadow the fact that the U.S. still has to host a peace summit at Camp David between Israel and Iraq. It's clear that while the Mastermind may be down, there are plenty of others ready to take his place - and all that stands between them and success are Kitty and Company.

Kidnappings, rescues, creepy hideouts, a hidden black site, and a domestic dispute that could end Jeff and Kitty's marriage are nothing compared to find not one but two hidden labs where dangerous and deadly things are brewing.

But when the President and his entourage finally get to the peace talks, things are no better. Mossad rightly suspects something's wrong with both their Prime Minister and the President of Iraq. A hidden in-control superbeing, an android replacement, and an army of Fem-Bots turn the peace talks into a Battle Royale that the team might not actually survive. And if they don't make it, Earth won't make it, either.

Review:
You know a series is special when the author still manages to make the story fresh and exciting when you're 13 books in! Gini Koch somehow manages to up the stakes in every new instalment and she definitely excels at flinging her characters into some crazy situations. Luckily Kitty is the queen of crazy and she has a pretty badass team of people on her side to help her.

The shocking ending of Alien in Chief left Jeff and Kitty reluctantly stepping into the roles of President and First Lady and now it's time to deal with the fallout. The Mastermind's plots left them with slots to fill in a lot of key government roles and now it's up to Kitty and Jeff to try and build a strong and trustworthy administration around them. They have the Planetary Council around to lend a hand but it's fairly safe to say they have their own motives for being on Earth in the first place and if that wasn't enough to think about Jeff is also supposed to be presiding over peace talks between Israel and Iraq. Throw in a few kidnapping attempts, the fact that half of the airborne team are still missing, the discovery of a new species of alien who has been hiding in plain sight for months, various key people being replaced by androids and the appearance of a new superbeing and you could say that Kitty and co have their hands full.

Kitty and Jeff never stagnate as a couple, juggling their jobs and their family keeps them on their toes and Jeff makes a pretty big mistake here that could cost him everything he cares about but no matter what is going on around them I have faith that they'll deal with things together and they have plenty of friends on hand to help shoulder the load. If you were nervous that them becoming one of the most politically powerful couples on the planet would slow them down you needn't be, Kitty is never going to settle for being a stay at home wife no matter how supportive she is of Jeff's career advancements and it's quite clear that there are still a lot of exciting challenges ahead for one of my favourite fictional couples.

As with any book in this series the plot is fast paced and well plotted, it's full of twists, there are several different enemies each with complex and well thought out plans in motion, add in fun banter between all our favourite characters, Kitty treating us to her usual wide array of musical inspiration and plenty of flying by the seat of her pants problem solving and you know you're in for a fun time. I don't think I'll ever tire of this world and these characters, I don't know anyone who can keep as many different balls in the air as Gini Koch does and the further you get in the series the more you start to realise how far in advance she must have planned things. Camp Alien is helping to kick off a whole new story arc and I'm incredibly excited to see what happens from here onwards. This series is nowhere close to done and I'm incredibly glad about that.