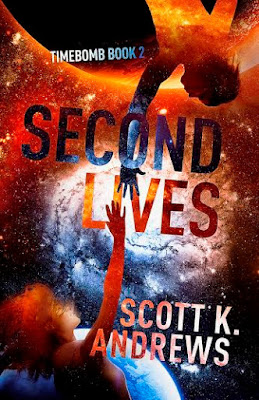 Wounded and scared, Jana, Kaz and Dora have escaped from their mysterious enemy, Quil. Taking refuge in a place outside of time, they devise a plan to change history, altering Quil's life so that she never meets them. But they have a lot of questions to answer before they can move forward: what is Jana keeping secret about her past? Does Kaz have an ulterior motive for wanting to change the future? And when did Dora, once a shy serving maid, become a ferocious warrior?

From the streets of Beirut in 2010 to the domed cities of Mars in 2155 and beyond, the three will fight for their own future, and the future of all humanity, by trying to save the life of the one person who has sworn to destroy them.

But there are risks to tampering with established events. One false move, and they could destroy time itself . . .

Review:
Second Lives is the second novel in Scott K Andrew's time travel series and I would definitely recommend reading these books in order because there has been a lot of devious plotting on the author's part that will be completely lost on you if you don't. While the first book was more about introducing our three protagonists Dora, Jana and Kaz, and talking us through the rules of time travel the sequel is all about trying to find ways to break those rules.

We've all seen Back to the Future so we all know that a small change in the past can have a huge impact on events in the future but what if things weren't quite so clear cut? What if there was a small loophole that might allow you to make changes to things in your own personal timeline without affecting everything else? Well, our trio already know that a disaster is going to occur in 2155, a disaster so huge that it destroys not just the future but also the past and now they're desperately trying to find a way to stop things. The trouble is they aren't 100% sure what causes things to go wrong in the first place so they're working in the dark and just trying to make the best choices they can. And if they're wrong about that loophole? Well then they might just be the ones who destroyed the world in the first place!

If you thought that the first book was fast paced you haven't seen anything yet, Scott K Andrews pulls out all the stops in Second Lives and he has masterfully interwoven past, present and future into a story that will have you on the edge of your seat from beginning to end. Every time you think you have something figured out he throws a curve ball at you and changes it all up again. Friends are keeping secrets, enemies go from bad to good to worse again, loved ones are both lost and found and friendships are changed forever.

I honestly don't want to say too much about the plot for this because I feel this is one of those series that is much more fun if you go in knowing as little as possible. What I will tell you is that the characters are brilliant, they've all grown and changed due to the things they've witnessed but they still make mistakes and struggle to make the right choices, these characters are real and incredibly easy to relate to. The plot will take you from 1640 through the present day all the way into 2155 and you'll travel from England to Beirut, through America and on to Mars. There is literally no predicting where events will take us next or what Dora, Jana and Kaz will be forced to deal with next but I can't wait to get my hands on the next instalment to find out!