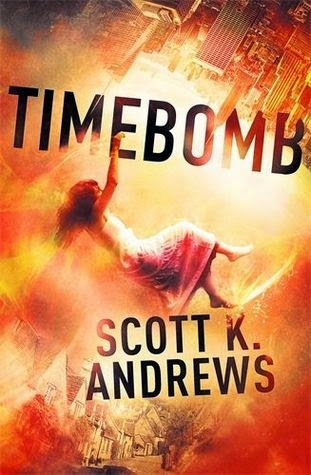 New York City, 2141: Yojana Patel throws herself off a skyscraper, but never hits the ground.

Cornwall, 1640: gentle young Dora Predennick, newly come to Sweetclover Hall to work, discovers a badly-burnt woman at the bottom of a flight of stairs. When she reaches out to comfort the dying woman, she's knocked unconscious, only to wake, centuries later, in empty laboratory room.

On a rainy night in present-day Cornwall, seventeen-year-old Kaz Cecka sneaks into the long-abandoned Sweetclover Hall, determined to secure a dry place to sleep. Instead he finds a frightened housemaid who believes Charles I is king and an angry girl who claims to come from the future.

Thrust into the centre of an adventure that spans millennia, Dora, Kaz and Jana must learn to harness powers they barely understand to escape not only villainous Lord Sweetclover but the forces of a fanatical army . . . all the while staying one step ahead of a mysterious woman known only as Quil.

Review:
TimeBomb is the first book in Scott K. Andrews' new time travel trilogy and it introduces us to three very different protagonists. First you have Jana, a girl from 2141 New York who finds herself pulled to the present day when she leaps off the top of a skyscraper. Then there is Dora, a young servant who has been pulled forward in time from Cornwall in 1640 and finds herself in a world very different to the one she is used to. Finally there is Kaz, the boy who finds them both at Sweetclover Hall, a young illegal immigrant who is on the run from an angry farmer. At first glance the three of them have absolutely nothing in common but they soon find themselves pulled into a web of intrigue and mystery. They have no idea why they have been drawn into this mess but they do know that they'll have to work together if they want to find the answers.

Most of this story is set in Dora's time period, right in the midst of the English Civil War, a very dangerous time for strangers to appear in a small, tight knit, community. Dora may be local but she's been missing for long enough to the locals to be suspicious and it doesn't help that she's arrived with strangers in tow. All events seem to lead the trio back to Sweetclover Hall and it appears that Lord Sweetclover and his mysterious wife Quil are behind everything that has happened to them but just what are they up to and why are Dora, Jana and Kaz so important to them?

As this is the first book in a trilogy we're left with a lot of unanswered questions but Scott K. Andrews has written a story that is fast paced and incredibly addictive to read. I picked it up thinking I'd just read a couple of chapters before bed and before I knew it I was halfway through the book. All three main characters are well drawn out and three dimensional, they all have different strengths and must learn to trust each other and work together as a team. It isn't easy for them to decide who else they can trust and they all make some surprising discoveries about their own timelines which I think will have an impact on them as the series continues. I'm very much looking forward to seeing where this story goes next, the great thing about time travel stories is that pretty much anything is impossible, I'd quite like to get the chance to explore Jana's futuristic world but I'm also very intrigued by the hints we've seen that the story actually begins way back before even Dora was born. I'll definitely be keeping my eye out for the sequel and I'd recommend this story to anyone who enjoys a fast paced read with plenty of mystery, lots of action and more than a little journeying through time.