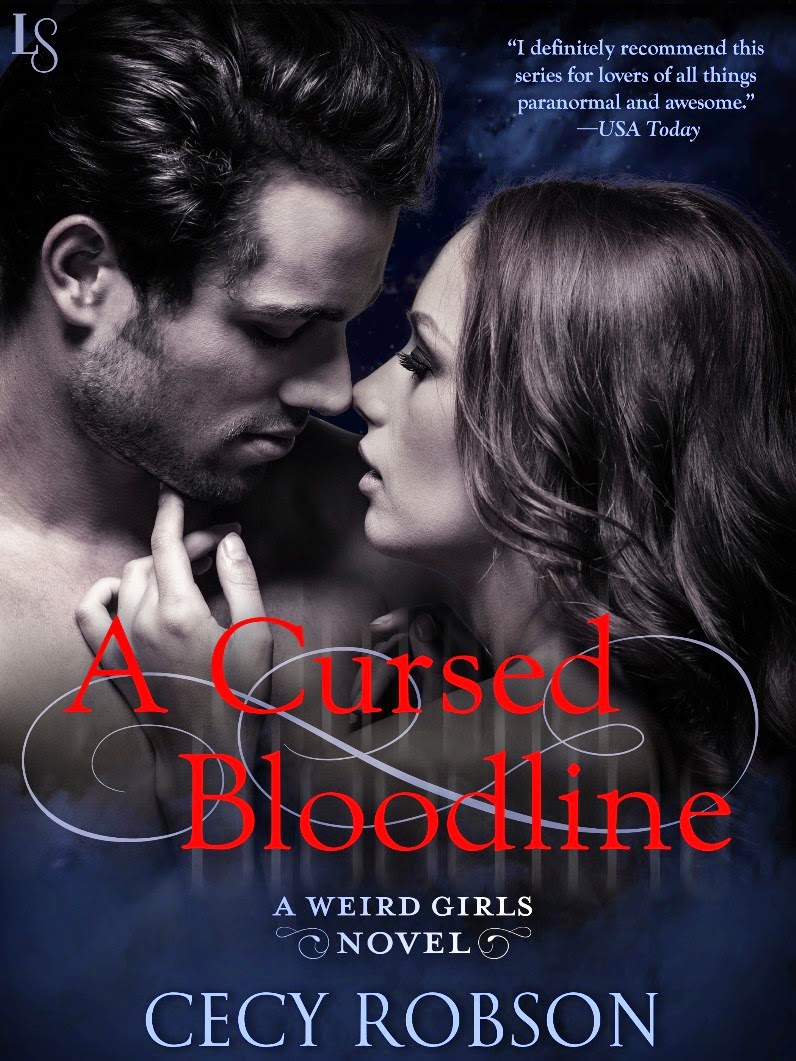 The Weird Girls return in another edge-of-your-seat novel from Cecy Robson! Just when Celia thinks the supernatural world can’t turn deadlier, a new rival emerges, proving just how dangerous a power-hungry were can be.

Since being cursed with unique abilities, Celia Wird and her three sisters have fought the most bloodthirsty preternaturals in the Lake Tahoe region. But Celia’s greatest threat is someone she would have never suspected: Anara, a werewolf Elder who has allowed his hatred for Celia to spiral out of control. In a play for dominance, Anara tortures Celia and gives her an ultimatum: sever her mate bond with pureblood were Aric—or Anara will kill everyone she loves.

From the instant they met, Celia and Aric have shared an attraction that cannot be tamed. So keeping Aric away is impossible, and Aric would sooner die than allow anyone to hurt the woman he loves. Misha, master vampire and Celia’s sworn protector, also finds his way into the chaos, seeking blood from those who have harmed her.

Now Celia and her sisters are caught in the middle of a war driven by lust, fueled by hatred, and destined to end in tragedy. For Anara is a force to be reckoned with, and he will not succumb without robbing Celia of those who hold her heart.

Review:
I'm the biggest fan of this series, I love the world, I love the characters and I've devoured every single book and novella the second I've got my hands on them. A Cursed Bloodline was one of my most anticipated reads of the autumn so I had incredibly high expectations but now that I've finished reading it I think I'm in shock and I'm still not quite sure what to make of it.

A Cursed Bloodline had me completely gripped from the very beginning, so much so that I stayed up all night reading and finished it just before 7am! The book brought out so many intense emotions in me, I was shocked, angry, horrified, angry, hurt, angry, devastated, angry and heart broken. There were a couple of moments where I giggled but they were few and far between which is unusual for this series. If I had to pick one word to describe my mood reading this book it would have to be depressed. Every single time Celia was given even a glimmer of light at the end of the tunnel something even worse would come along and smash her hope to smithereens and I actually got to the point where I was finding it painful to carry on reading. Never mind poor Celia - I needed something good to happen to stop my own heart from breaking!

I do feel that the book deserves top ratings because it made me feel everything so intensely, not every author has the ability to do that to me, but on the other hand I read for fun and this book made me suffer. I can deal with a certain amount of emotional upheaval in a story but there comes a point where you start thinking enough is enough and because everything is so bleak you start to wonder if you can bear to carry on reading. I'm still a huge fan of this series though and I'm going to trust Cecy Robson to make things better in the next instalment. She's taken us through rough patches before (although never quite this bad!) and always brought the characters out the other side stronger than ever so I'm going to trust that she'll manage it again. I just hope to god that the next book will be a little lighter in tone though or I may need therapy afterwards!

One thing I really love about these books is seeing how far Celia has come. Her bond with her sisters is really tested this time and I did find myself a little annoyed with the others (particularly Shayna) for not standing by her when she needed them. They should have known her well enough to understand that she must have good reasons for her actions and they should have supported her even if they didn't agree with her decisions - just like Danny and Bren did. I was less annoyed with the way the wolves behaved because they were acting with Aric's best interests at heart and they don't know Celia as well as her sisters should but even they started to annoy me after a while. It was Anara that brought my rage to unprecedented levels though and his actions made my blood boil.

The story has plenty of action where we get to see Celia kicking ass but I was a little disappointed that a major part of the final battle was off screen and we only find out exactly what happened later on when Celia asks her sisters about it. I know there is a reason for that (Celia was unconscious during that scene and since she's the narrator it would have been impossible for her to witness events unfolding) but I really would have preferred to see what happened first hand. Perhaps we could have seen Celia struggling to stay conscious and been given hazy details about what was happening as she looked on? I think that would have worked better for me anyway.

A Cursed Bloodline is one of those books that is going to shock fans. It'll probably be a Marmite book, one that you'll either end up loving or hating but no matter what you're bound to have an extreme reaction to it which, quite frankly, can only be a good thing. It took me a long time to decide whether this is my favourite instalment in the series or the complete opposite but I've come to the conclusion that any book that has me so invested that I feel like I'm being kicked in the teeth every time something happens to the heroine has to get top marks. This is definitely one of my favourite series and I'm now even more eager for the next book than ever!