I'm a huge fan of Gini Koch's Katherine "Kitty" Katt series so I'm thrilled to be taking part in the blog tour today for the upcoming release of book 10, Universal Alien. This is one of my favourite laugh out loud series, one with fantastic characters, wonderfully creative world building and fantastic edge of your seat action so if you haven't come across it yet then I can't recommend it highly enough.

I have a fantastic guest post and giveaway from Gini to share with you but first let me give you a little more information about Universal Alien: 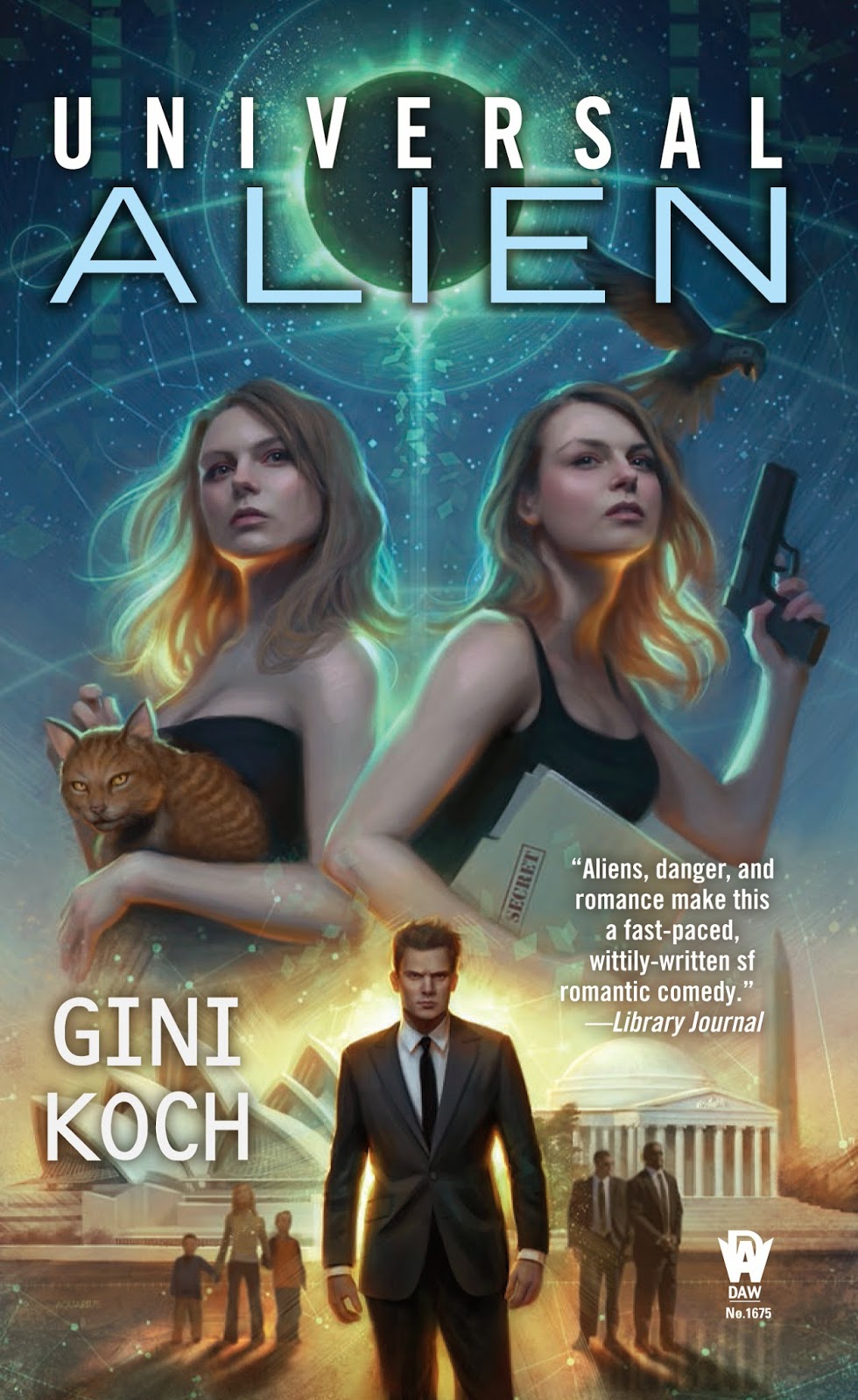 Being the wife of the Vice President isn’t easy. Especially when your talents lie in kicking butt and rocking out . . .

Jeff and Kitty Katt-Martini find out just how easy it is for the wife of the Vice President of the United States to unintentionally insult an ally. Now they have to smooth things over with the Australian Prime Minister, pronto, or risk creating an international incident the worldwide anti-alien coalitions will be able to use to force Jeff to resign and the A-Cs to leave the planet.

But before Kitty can make things worse, a cosmic congruence and a little help from some powerful beings shoves her into another world -- one where she’s been married to Charles Reynolds for years and aliens don’t exist. She’s also landed in the middle of a huge conspiracy and is marked for death . . . but at least that’s business as usual.

Kitty’s not the only one confused, because the Kitty from that world has taken her place in this one. Now Alpha Team and the Diplomatic Corps have to make sure that no one spots that there’s been a switch, while keeping World War III from happening. And they have to do so while keeping this new Kitty in line, because she has views about what to do and how to it, and time is running out.

Can both Kittys save their respective days before it’s too late to go home to the universes they belong to? Or will one Kitty decide to keep the other’s life . . . forever?

10. Wolverine (because I can make the case for mutants, and an adamantium skeleton, being science fiction as much as comics).

9. Princess Leia from the Star Wars movies (well, the good ones, anyway). I used to not care for her, but over the years I’ve really come to appreciate her as a hero.

8. Mrs. Peel from The Avengers TV show (yes, it was supposedly a spy show, but it incorporated a lot of science fiction, and kind of fantasy, and everything else, and Mrs. Peel was the coolest chick in the WORLD).

7. Captain America/Steve Rogers (making the list because Captain America, like Iron Man and the Avengers, is as much a science fiction movie/s as it is a comics movie).

6. Sarah Connor from the Terminator movies (well, the good ones, anyway).

5. Ripley from the Alien movies (well, the good ones, anyway).

3. The entire crew of the Protector from Galaxy Quest. 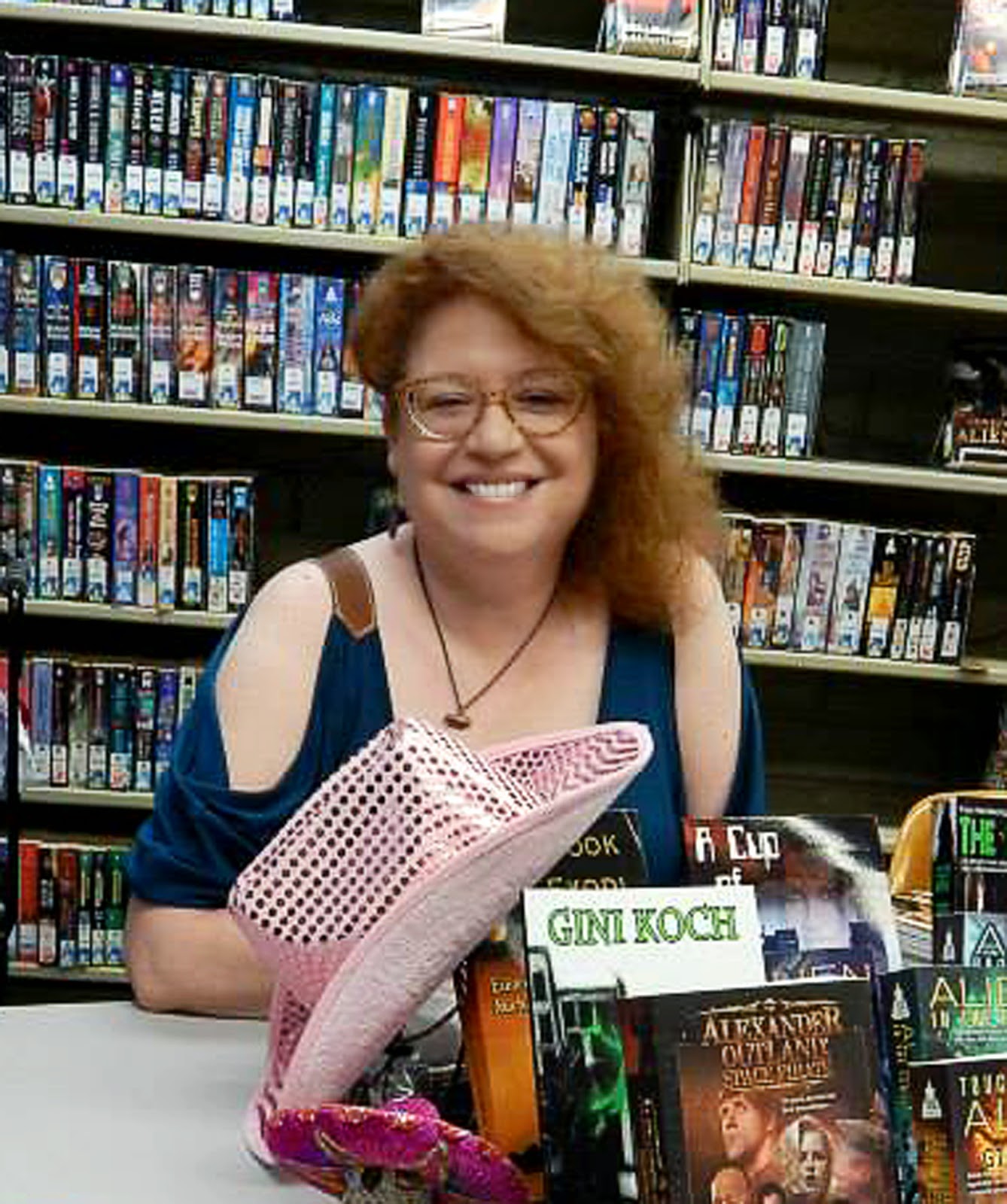 Gini Koch writes the fast, fresh and funny Alien/Katherine “Kitty” Katt series for DAW Books, the Necropolis Enforcement Files series, and the Martian Alliance Chronicles series. Alien in the House, Book 7 in her long-running Alien series, won the RT Book Reviews Reviewer’s Choice Award as the Best Futuristic Romance of 2013. As G.J. Koch she writes the Alexander Outland series and she’s made the most of multiple personality disorder by writing under a variety of other pen names as well, including Anita Ensal, Jemma Chase, A.E. Stanton, and J.C. Koch. Currently, Gini has stories featured in the Unidentified Funny Objects 3, Clockwork Universe: Steampunk vs. Aliens, and Two Hundred and Twenty-One Baker Streets anthologies, and, writing as J.C. Koch, in Kaiju Rising: Age of Monsters, The Madness of Cthulhu, Vol. 1, and A Darke Phantastique anthologies. She will also have a story in the first book in an X-Files anthology series coming out in 2015. Gini can be reached via her website: www.ginikoch.com

Gini is offering one winner the choice of one of any of the first 9 books in the Alien/Katherine “Kitty” Katt Series (Touched by an Alien, Alien Tango, Alien in the Family, Alien Proliferation, Alien Diplomacy, Alien vs. Alien, Alien in the House, Alien Research, or Alien Collective), signed and personalized. Open internationally. You can enter the giveaway using the rafflecopter form below.