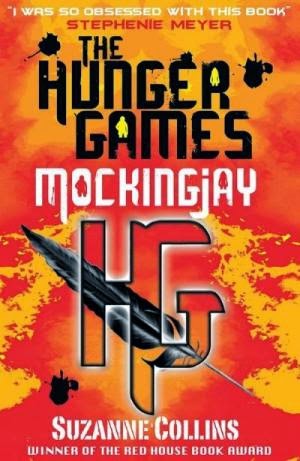 Katniss Everdeen, girl on fire, has survived, even though her home has been destroyed. Gale has escaped. Katniss's family is safe. Peeta has been captured by the Capitol. District 13 really does exist. There are rebels. There are new leaders. A revolution is unfolding.

It is by design that Katniss was rescued from the arena in the cruel and haunting Quarter Quell, and it is by design that she has long been part of the revolution without knowing it. District 13 has come out of the shadows and is plotting to overthrow the Capitol. Everyone, it seems, has had a hand in the carefully laid plans -- except Katniss.

The success of the rebellion hinges on Katniss's willingness to be a pawn, to accept responsibility for countless lives, and to change the course of the future of Panem. To do this, she must put aside her feelings of anger and distrust. She must become the rebels' Mockingjay -- no matter what the personal cost.

Review:
I'm going to warn you now that this review may end up veering into spoiler territory so if you've not read the book then you should probably look away now! As much as I enjoyed the first two books in this trilogy I have to admit that it isn't a series I feel incredibly invested in. I liked the books and the movies but I wouldn't consider myself a Hunger Games fangirl, something that is probably obvious when I mention that it took me four years from buying the entire series to actually getting around to reading Mockingjay! I actually think not being totally hooked on this series worked in my favour when it came to this last book because it meant I wasn't as disappointed as I could have been. I had a feeling that I wouldn't be happy with how things ended (one of the reasons I've put off reading this book for so long) so it didn't come as a huge surprise to me that this book was the worst in the series.

What did surprise me was how incredibly different Katniss is in this instalment though, I know she has been through a lot and I guess in some ways her emotional state was probably a far more realistic reaction to that than anything else, but I found it so frustrating to watch her sitting around moping. I desperately wanted her to be more proactive and kick ass like she always was in the past and I got bored of watching her hide away from life and trying to ignore what was happening around her. She does get some of her fight back later on but it came a little too late to redeem the story for me. I hated the ending with Snow too, all that build up, the way Katniss has lived for one reason and one reason only - to kill him, yet at the end she just doesn't. Why? Why would she avoid that when she's standing there with the perfect opportunity? I just don't get it.

Don't even get me started on the love triangle. I knew she would end up with Peeta, I wasn't happy about that fact but I knew it was coming no matter how much I thought Gale was a better fit for her. But Peeta spends the whole book hating her, he was tortured by Snow and made to hate her and I felt incredibly bad for everything he had been through but it wasn't realistic that the anti-Katniss programming he had been through would have been reversed so quickly. I just found it impossible to believe that he would be able to get past what had happened to him so fast and thought it would have been better for his mental health for him to have been allowed to heal with someone else. I felt from quite early on that Suzanne Collins was trying to make Gale look cold and uncaring about innocent lives so that we didn't mind him not ending up with Katniss. No matter that he is the one person who has ALWAYS been there for her, who has had her back, who has looked after her family, who is capable of fighting by her side and who has been willing time and time again to put himself in danger to protect her. None of that means anything because he helped design a weapon that killed Prim. He didn't put Prim in harm's way, he would NEVER have hurt Katniss like that but oh what a convenient way to keep them apart.

The ending of the story feels rushed, we don't really get to see how life improves for those in the districts and Gale just takes a job away from Katniss and disappears off the page without even saying goodbye. What happened to him? Don't we get to see him find happiness? Even the epilogue is disappointing. It doesn't feel like Katniss is in love with Peeta - it feels like she settled for him and that's probably the main reason why I hate the outcome of the triangle so much. She actually seems more like a robot than a person at the end and I don't feel any emotional connection from her to any of her family. The whole thing was just disappointing & I wish I hadn't bothered to read Mockingjay at all. I read this in anticipation of going to see part 1 of the movie next week but now I'm not even sure if I want to bother. What's the point of watching another 2 films when I know I'm going to hate the ending?