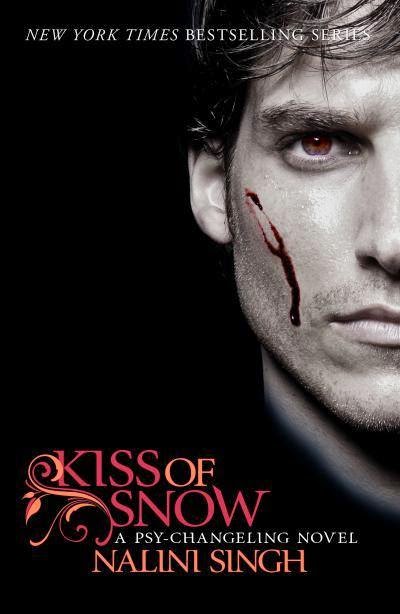 Since the moment of her defection from the PsyNet and into the SnowDancer wolf pack, Sienna Lauren has had one weakness. Hawke. A dangerous alpha, the response he draws from her could almost compel her to madness.

Hawke is used to walking alone, having lost the woman who would've been his mate. But Sienna fascinates the primal heart of him, even as he tells himself she is far too young to handle the wild fury of the wolf.

Then Sienna changes the rules and, suddenly, there is no more distance, only the most intimate of battles between two people who were never meant to meet. Yet as they strip away each other's secrets in a storm of raw emotion, they must also ready themselves for a far more viscous fight.

A deadly enemy is out to destroy the SnowDancer pack, striking at everything they hold dear, but it is Sienna's darkest secret that may yet savage the pack that is her home . . . and the alpha who is its heartbeat . . .

Review:
I feel like I've been waiting forever for Hawke's book, I think I pretty much fell for him the moment he was first introduced and every little snippet we've seen of him since then has only cemented him as a firm favourite. So you could definitely say I had high expectations for Kiss of Snow before I read it. Happily it was everything I could have dreamed of and more and it's now my favourite book of the series (until I read the next one anyway!).

As the SnowDancer alpha Hawke has always put his people first. He has lieutenants he can rely on for help but when it comes down to it he shoulders all the responsibility of the pack's safety on his own. The girl who should've been his mate died when they were still children and since then he has always steered clear of proper relationships because he knows he'll never give another woman his heart. Sienna has fascinated both him and his wolf ever since she came to live with the pack but not only is she much younger and less experienced than he is he is also scared that he could hurt her by never being able to give her what she needs.

Sienna is a powerful Psy with an unusual ability, one which comes with a high risk of causing her to self destruct. She has become better at controlling her powers but being around Hawke is the one thing that is guaranteed to cause a flare up. Sienna has wanted Hawke for such a long time but he seems determined to ignore the attraction between them, it's reached a point where Sienna has had enough though and she is determined to push the boundaries and rile him up a bit.

I can't even begin to tell you how much I loved seeing their relationship develop. It's been building for a looooooong time now and their chemistry is absolutely off the charts. I loved seeing Sienna start to really fight for Hawke's attention, she's always pushed his buttons but now she's deliberately poking him with a sharp stick just to get a reaction. Hawke is taken by surprise by how far she is willing to push him but he needs a woman who is capable of standing up to him and Sienna is determined to prove that's her. Their's is a slow build romance, Sienna wants Hawke but is understandably nervous since she's so inexperienced and once Hawke decides to pursue her he pulls out all the stops to make sure she is with him every step of the way. I think I could have died of frustration waiting for them to finally give into temptation but I mean that in the best possible way and it was so, so worth the wait. Hawke was everything I thought he would be and then some which makes Sienna a lucky, lucky girl!

Alongside the fantastic relationship between Hawke and Sienna Kiss of Snow has a lot more to offer. There are some utterly adorable moments between Lucas and Sasha, a wonderful side romance between Lara and Walker and some wonderful Lauren family moments that allow us to spend more time with Judd, Brenna, Drew, Indigo and the Lauren children. Don't even get me started on what the Psy Council are up to and the absolutely heart stopping, action packed final quarter of the story - I was on the edge of my seat and almost too scared to breathe in case I missed something! Nalini Singh is hands down the best author I can think of when it comes to blending multiple plot threads and points of view into a story that is impossible to put down. She manages to include just the right amounts of sweet romance, caring friendships, down and dirty sex, fun banter and almost unbearable tension to create the ultimate reading experience and once again I loved every minute of it!