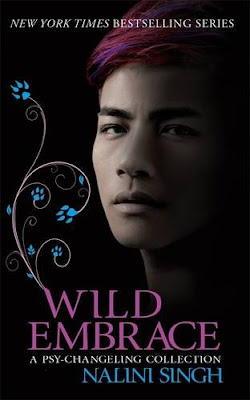 The “alpha author of paranormal romance”* presents a stunningly sensual collection of four all-new Psy-Changeling novellas, in which taboos are broken, boundaries are crossed, and instincts prove irresistible...

Echo of Silence
In a deep-sea station, Tazia Nerif has found her life’s work as an engineer, keeping things running smoothly. But she wants nothing more than to break down the barrier of silence between her and her telekinetic Psy station commander...

Dorian
A changeling who can never shift lives a life of quiet frustration—until he learns how to let his leopard come out and play...

Partners in Persuasion
Still raw from being burned by a dominant female, wolf changeling Felix will never again risk being a plaything. But for dominant leopard Dezi, he’s the most fascinating man she’s ever met. She just has to convince this gun-shy wolf that he can trust the dangerous cat who wants to take a slow, sexy bite out of him…

Flirtation of Fate
Seven years ago, Kenji broke Garnet’s heart. Now the wolf packmates have to investigate the shocking murder of one of their own. And the more Kenji sees of the woman Garnet has become, the deeper he begins to fall once more. But even his primal instincts are no match for the dark secret he carries...

Review:
I love the way Nalini Singh gives fans a chance to see the romances that don't get to play out in the full length novels. The Psy-Changeling world is such a huge one that it would be impossible for everyone to get their own book so these additional novellas are a great way to revisit old favourites or just add extra depth and background. She is one of the few authors who never fails to make me connect with her characters, whether she's writing short stories, novellas or full length books she never lets me down and I always know I'm in for a treat when I pick up something with her name on it.

Wild Embrace contains four brand new novellas that have never been published anywhere else. These stories are set at different points throughout the Psy-Changeling series (I'll point out where they fit in as I talk about each individual novella) and although they aren't essential reading because you won't miss any major plot points if you skip them I'd still highly recommend picking up this anthology because they're all great.

Echo of Silence:
This novella is set just after Visions of Heat and gives us the chance to spend time on the deep-sea station Alaris with human engineer Tazia and telekinetic Psy Stefan. I can't be the only fan who has been desperate to get to know the Stefan, I mean he was the one who wrote the Psy guide to sex that all the other Psy guys have been adding to throughout the series, so of course I wanted to know more about him! Although it isn't a secret that Stefan's Silence is defective he still has to be incredibly careful not to show his emotions in case he ends up getting his mind wiped by the Psy Council. The only reason he's been left alone this long is because he has such a rare and useful ability but that won't save him if they find out just how "broken" he is. Just because he's good at hiding his emotions doesn't stop him feeling them though and I absolutely loved the slow build relationship that develops between him and Tazia.

Tazia was a great character and I loved seeing how strong she was to fight against her culture to follow her dreams of becoming an engineer. It wasn't easy for her to go against her family's wishes and it was for her to be estranged from the people she loved but it was nice to see how Stefan was so caring towards her when she needed him to be. They're also facing a bigger struggle than most of the other couples in the series because Stefan has to work so hard to hide their relationship on the Psy-net. They are taking a huge risk to be together but it more than pays off for them in the long run.

Dorian:
I loved Dorian's story, it's the shortest one in the anthology and unlike the others it's not a romance but it was great to get further insight into his character's background. This story takes place over a number of years and finishes just after events in Visions of Heat. As a leopard Changeling without the ability to actually change shape Dorian has never had it easy and this story is all about him learning to come to terms with his situation.

Dorian had to learn to find other ways to communicate with his other side and he had to learn other ways to play and work alongside the rest of his pack. It was obvious in his book (Hostage to Pleasure) that he was well respected by Lucas and his packmates but this is more about him dealing with his personal demons. This story does contain a few spoilers for his storyline so if you've not read his book yet I'd recommend holding off on this one. Having said that if you already know what happens to him later on you're going to absolutely love the last scene in this story. It totally melted my heart and I love Dorian more than ever now.

Partners in Persuasion:
This novella begins towards the end of Tangle of Need and features submissive wolf Felix and dominant leopard Dezi. Felix has been hurt before by a dominant wolf so he's afraid of getting burnt a second time but Dezi knows what she wants and she has the patience to win Felix around. It's not always easy to sell me on a dominant female / submissive male pairing, too often dominant is actually code for "arrogant and bitchy" when it comes to women while submissive men are just too easy for them to walk all over and that never sits well with me. I trust Nalini though and she didn't steer me wrong here.

Dezi is strong and she's definitely the dominant partner in this pairing but she's not pushy or arrogant and she's very careful not to push Felix beyond his boundaries. Felix may be submissive but that doesn't make him weak and he's willing to stand his ground when he needs to so I have no fears that Dezi could take advantage of him. I think they're actually both incredibly strong characters and I enjoyed seeing them work around the challenges that come as part of being not just a dominant/submissive pairing but also from being from both SnowDancer and DarkRiver packs. I love the way the two packs are becoming more and more entwined as the series progresses!

Flirtation of Fate:
I think a lot of fans have been waiting for Kenji and Garnet's story for a long time now, Flirtation of Fate takes place towards the end of Heart of Obsidian and gives Kenji a second chance to make things right with Garnet after he rejected her previously. I've loved the banter between these two for a long time now and I've been wondering if they were ever going to act on it but I didn't realise quite how much Kenji had hurt Garnet by walking away from her before. I was irritated with him when I found out his reasons, I thought their age was a pretty poor excuse for leaving when he knew exactly what she was to him but he's so lovable that I ended up forgiving him just like Garnet did.

This story takes place away from the SnowDancer den at the territory Kenji look after and there is a bit of mystery going on in the background after one of their packmates is murdered. I have to admit I'd figured out the killer fairly early on but that didn't stop me enjoying seeing Kenji and Garnet working together to try and put it all together. I would have loved this story to be a bit longer so we could have spent more time with them as a couple but I still really loved their flirtatious banter and think they're a fab couple.