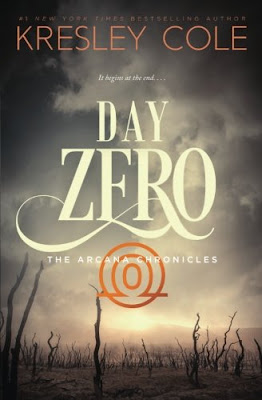 Arcana means secrets, and these Arcana Chronicles short stories from #1 New York Times bestselling author Kresley Cole are filled with them. Experience firsthand the beginning of the end and behold the apocalypse through the eyes of characters you only thought you knew.

Ashes to Ashes . . .
Evie Greene's story of the Flash is just one of many. All over the world, those connected in some way to the lethal Arcana game - like Death, Jack, and Fortune - must first survive a horrifying night of blood and screams.

We all fall down.
Some will have to grapple with new powers; all will be damned to a hellish new existence of plague, brutality, desolation, and cannibalism. Find out who they lost, why they endure, and what they sacrificed in order to live past Day Zero . . .

Review:
If you're a fan of Kresley Cole's Arcana Chronicles then Day Zero is a must read companion. It does contain spoilers for the first three books so I wouldn't recommend picking it up until you've read Dead of Winter but it contains lots of fun information about the major Arcana players in the series and definitely got me excited about reading the next book.

Have you ever wanted to know where each of the main characters were when the Flash occurred on Day Zero? We saw Evie's story first hand and have heard bits and pieces about what happened to the others throughout the series but this book gives us a chance to see exactly what happened. It also includes profiles on the various Arcana with information about their powers, special skills, weapons and a whole lot more. Some of the information is still blank because it hasn't been uncovered and Matthew (aka The Fool) has redacted things he's not ready to share yet but it was really nice to have everything all in one place to remind me of the details.

You'll be very happy to hear that Jack's Flash story is also included even though he's not one of the Arcana players. I still suspect that he's the inactive card but Kresley Cole states at the beginning of the book that she'll neither confirm or deny if that's the case. Either way I absolutely love Jack's character so I'm glad we got to hear from both him and Death in this book and I'm definitely ready to continue the series and find out what happens next in Arcana Rising.